I reach age 52 in May, and feel I am coming into the light after passing through a deep, dark tunnel.
I'm not a sage yet, but I know I’ve survived experiences 9 out of 10 doctors agree would have driven others to alcoholism, opiates or suicide, and don’t think I haven’t considered all three.

And I am proud of it. I feel I am traveling the paths of illustrators such as Tony Sarg, Charley Bowers and John Held, Jr., using my skills to approach not just one, but every genre, outlet and medium. I was, in many ways, lucky to grow up in the time I did, when it was all possible. Other, more ‘successful’ artists have stayed in the same groove for decades. I feel that my breadth of experience in art and in life itself has informed my work, expanded its perspective, and helped it to change and mature.

Now that these past works are assembled and can be examined on the internet, I say “Cripes, did I do all that?” So do many observers. The scope of the work is too large and confusing. It’s frustrating when folks see one phase of my work and decide they’ve seen the whole sh-boom. The SONIC fans unhealthily fetishize over Robotnik to the detriment of everything else. Others feel the same about the HUGO comics or my erotic work. People tend to define an artist through the stage when they first discovered him, or grew up with. I cannot change this, however much I wring my hands over it. Yes, it’s frustrating because I feel I’ve grown myself, and feel little nostalgia for the past. In fact, I’d rather forget it.

It is the film work that played the largest role in reaching a new vision that I’ve since applied to my comics work. The work that's benefited the most, I feel, are my twelve years of adapting stories for the anthology series, GRAPHIC CLASSICS. The editor has entrusted me with genres I never would have selected for myself. On receiving the texts, I honestly question myself: “What the hell am I gonna do with this?” But his choices have always been spot-on. I’ve applied new techniques and media, often succeeding in making 150 year old stories emphatic and vital to myself and the new reader. This is the work I am proudest of, but it’s unknown to most comic readers. Classic adaptations often evoke unhappy memories of the stodgy, dusty and musty. (GRAPHIC CLASSICS sells the best in the scholastic and academic markets, which are actually more profitable.) But these are no left-to-right high school pageants told from an emotional distance. They evoke my heart and soul. 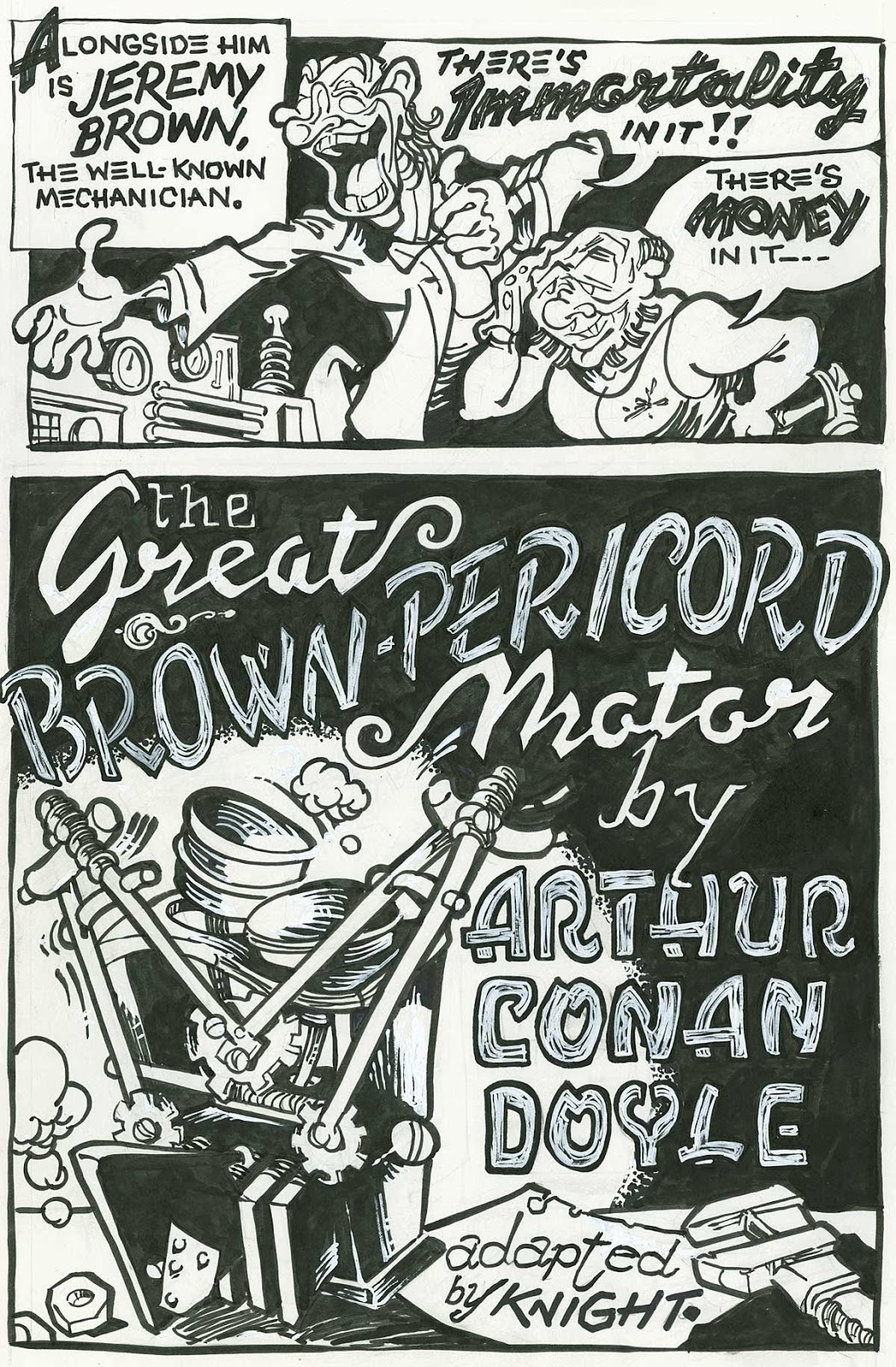 I provide a link to a full Arthur Conan Doyle adaptation. My hope is that it will introduce a new and hopefully enlightening side of my work to the reader.

COPYRIGHT 2014 BY MILTON KNIGHT
Posted by Milton Knight at 10:48 AM No comments:

MY FATHER, THE DRUNK

My dad was a mean drunk (he wasn’t any laughs while sober, either). Thankfully, I had the means to not let it cripple me for life; I had my creativity for release.

My father's influence worked its way into my work, most vividly in the character King Adolph from my comic book, HUGO.
At this time, I tempered the character with moments of inept kindness. Years later, my romanticism eroded. Said one reader: “I have more of an understanding of how your character, King Adolph (the 'father figure'), went from being a lovable oaf in your early HUGO work, to a miserable, violent drunkard in the comics you produced later.” Below: comics from 2003-2004. 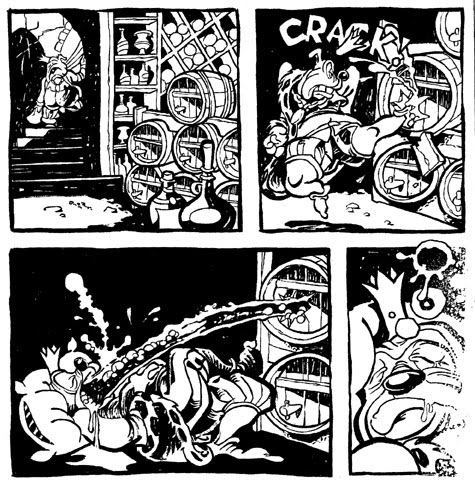 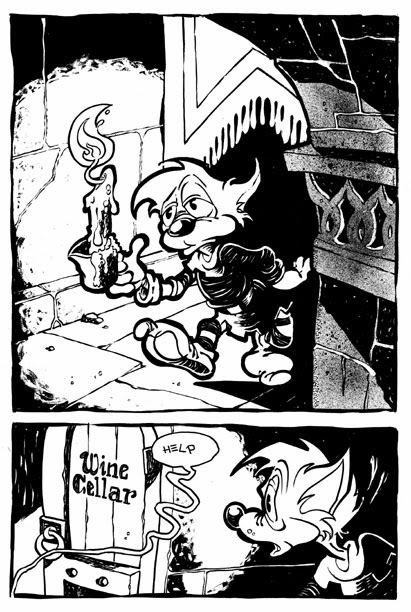 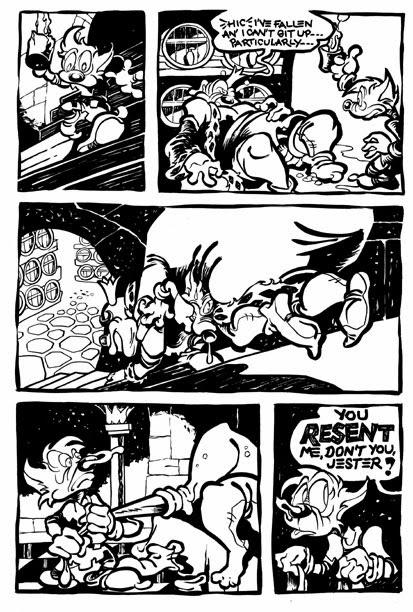 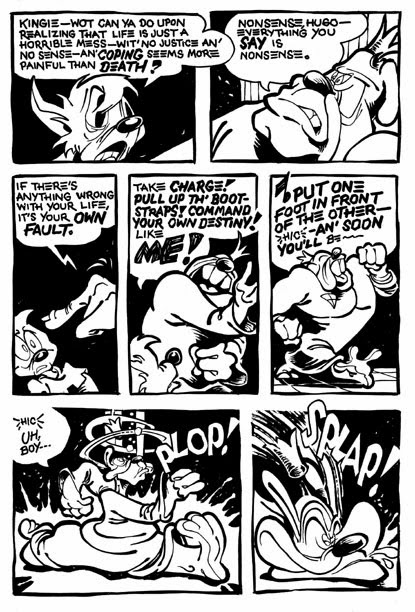 There’s a very slight chance that even one's worst moments can supply a durable idea. These comics are still available from me, original books and a reprint. If you’re interested in delving deeper into my
damaged psyche by reading them, email me at miltonknight@earthlink.net 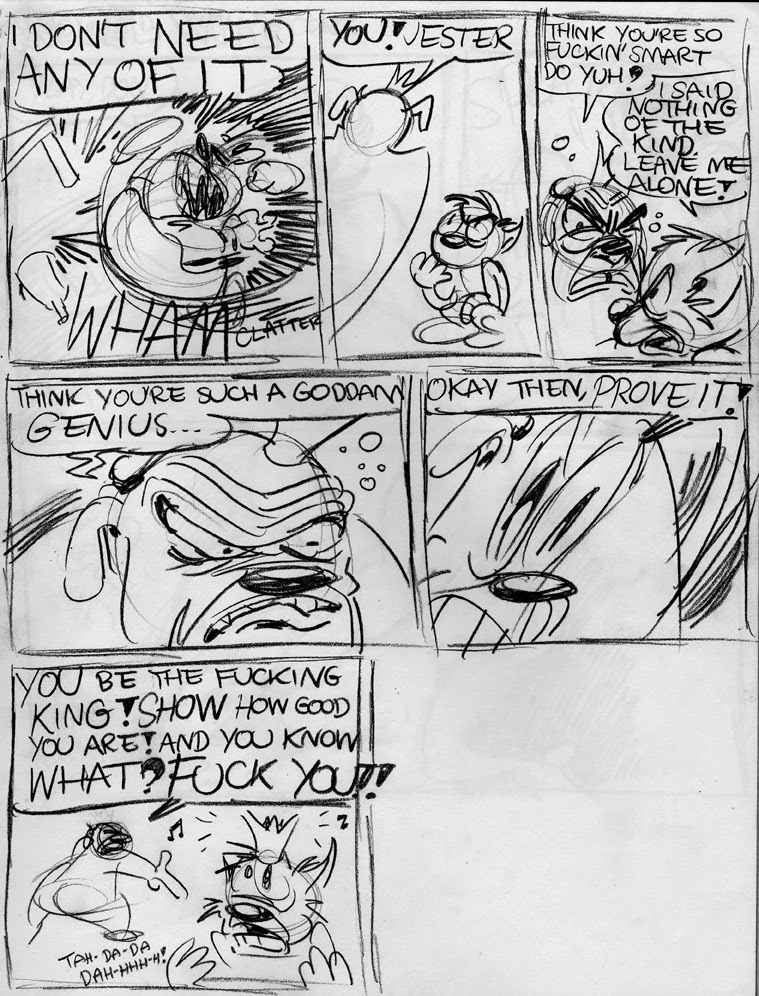 COPYRIGHT 2014 BY MILTON KNIGHT
Posted by Milton Knight at 3:39 PM No comments:

Commissions, gifts and donated drawings of your favorite cartoon pals! 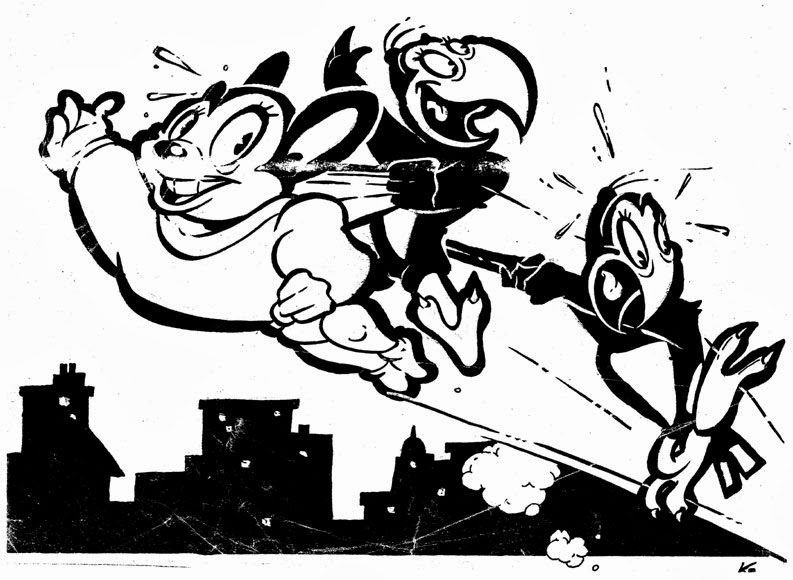 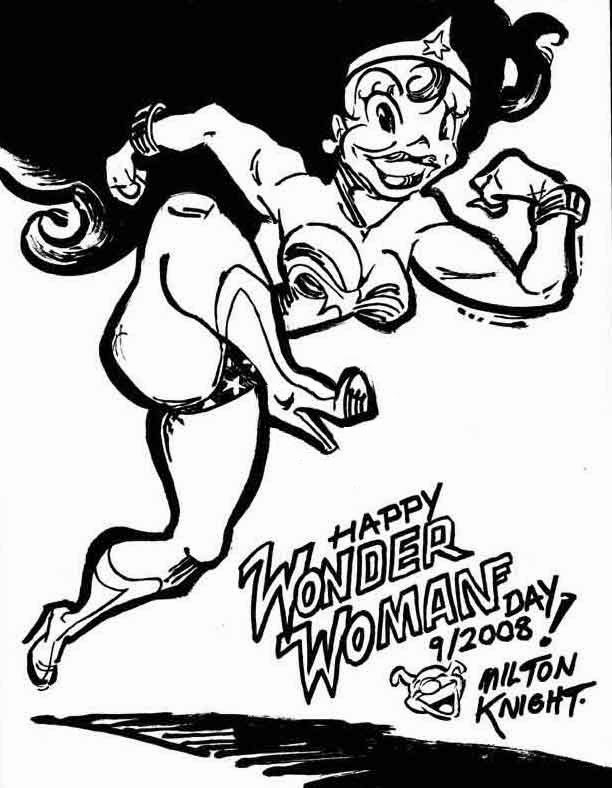 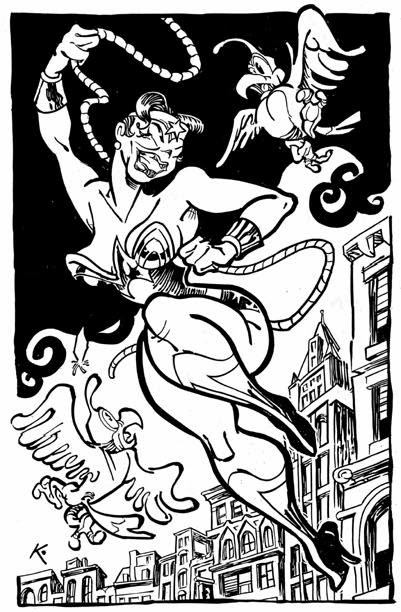 COPYRIGHT 2014 BY MILTON KNIGHT
Posted by Milton Knight at 1:06 AM No comments:

Bits and pieces from works, generally unpublished ones, inspired by the Fleischer Studios legacy. 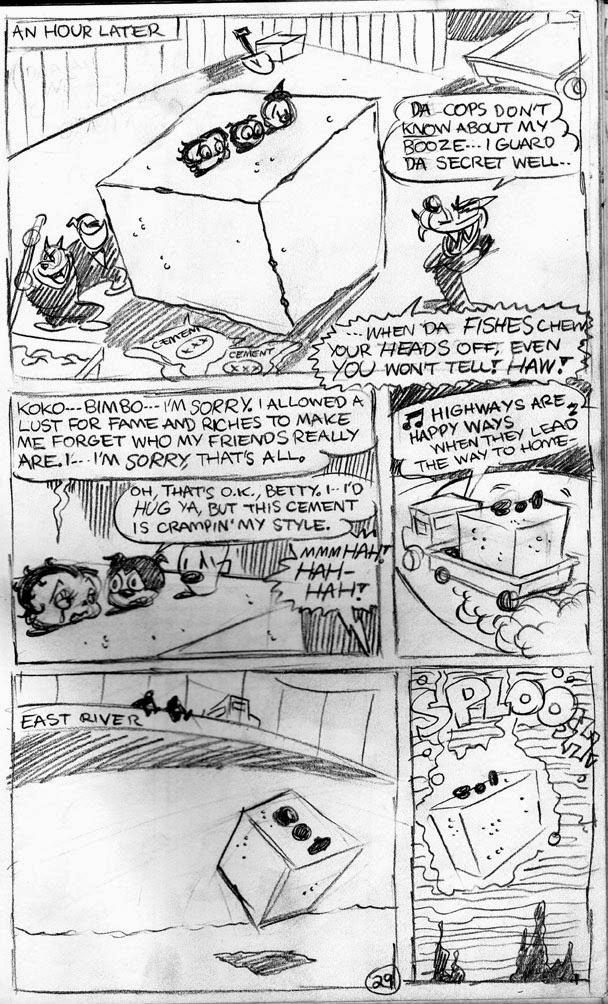 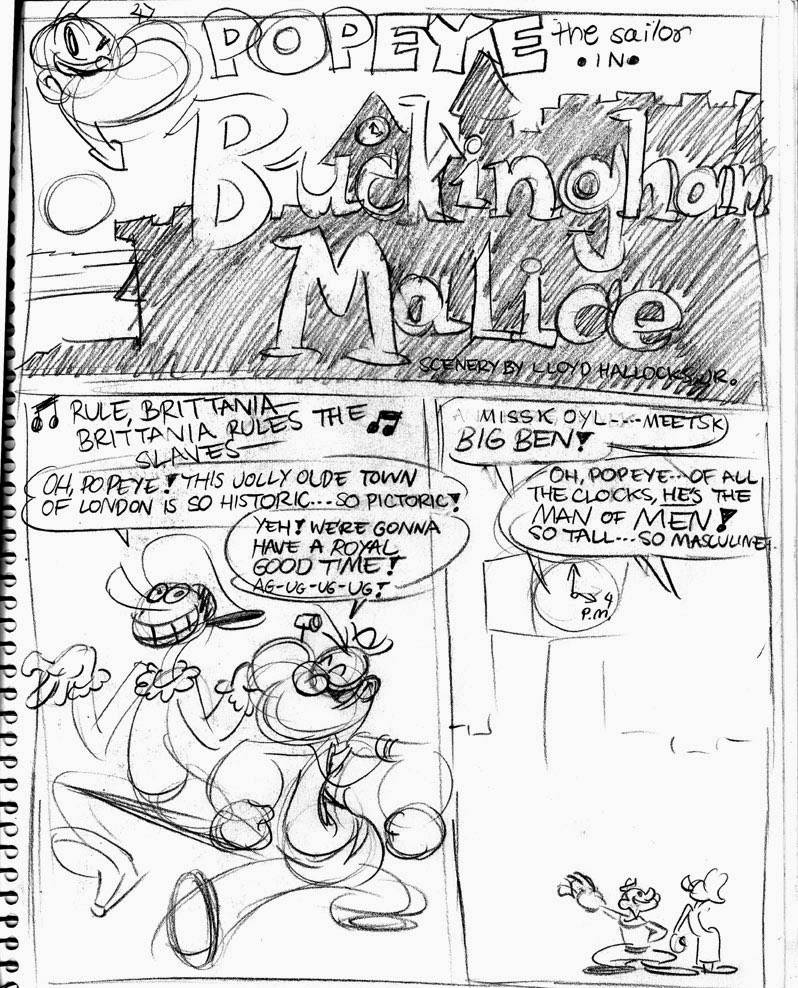 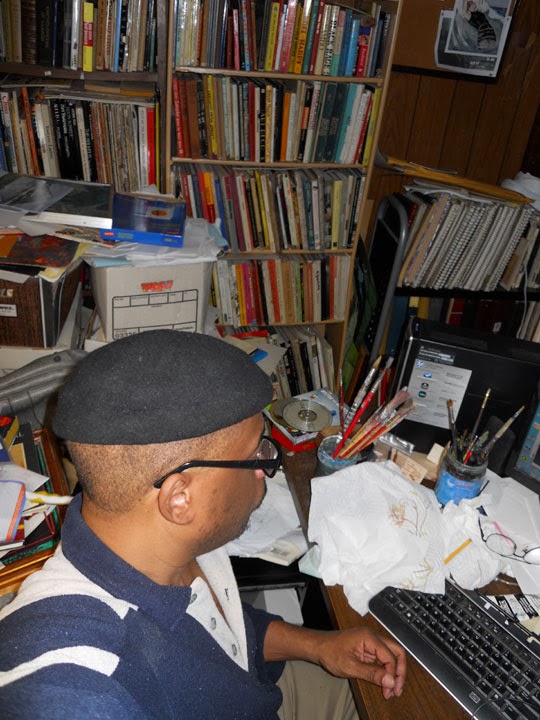 My beret is a prop. I tilt it forward and back while I'm working. It helps.

Posted by Milton Knight at 5:12 PM No comments:

FROM THE VALLEY OF THE UNPUBLISHED:

Occasionally, I am driven to do a finished piece of work just to see what the results will be, as with the comic below, created while I was freelancing for CRACKED Magazine during the late 1980s.

Moved by the potentials of their fictitious 'reporter', Nanny Dickering, I proposed a comic series. Even in the face of such stiff competition as John Severin, Bob Fingerman and Bill Ward (!), my brand of cheesecake was deemed too overt.

Colored with Design Art Markers, my chosen medium of the period. 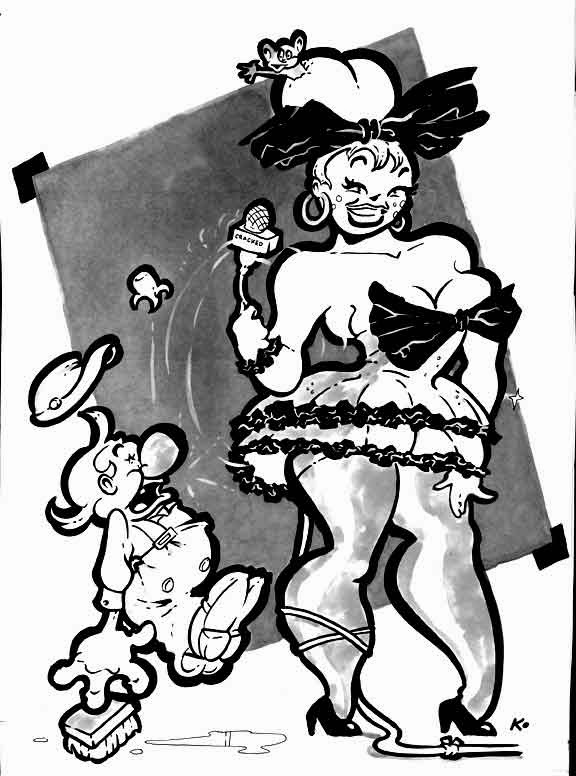 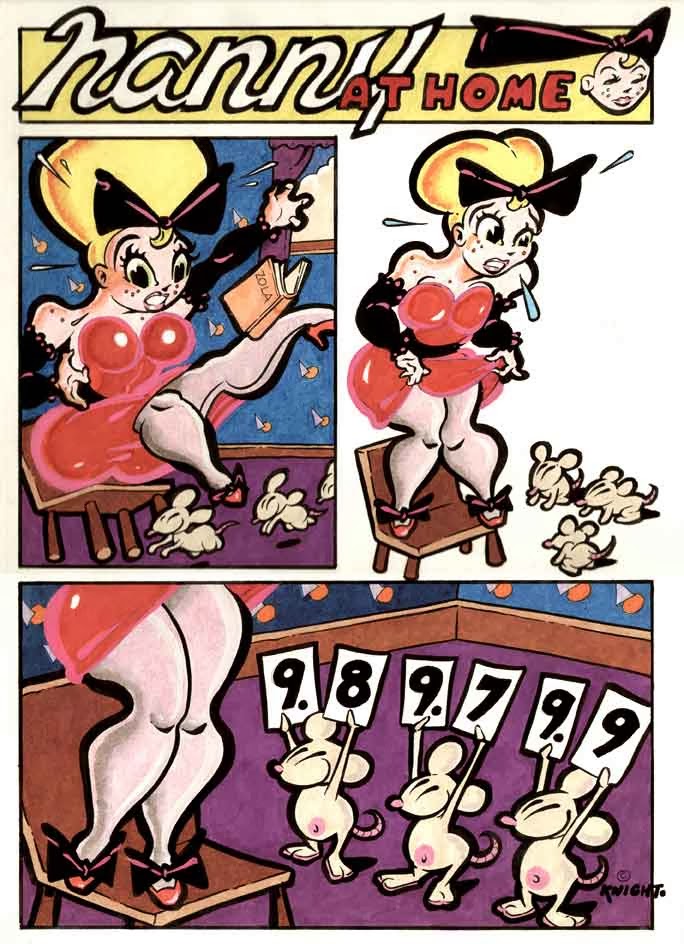 COPYRIGHT 2014 BY MILTON KNIGHT
Posted by Milton Knight at 2:09 PM No comments:

COPYRIGHT 2014 BY MILTON KNIGHT
Posted by Milton Knight at 7:50 PM No comments: 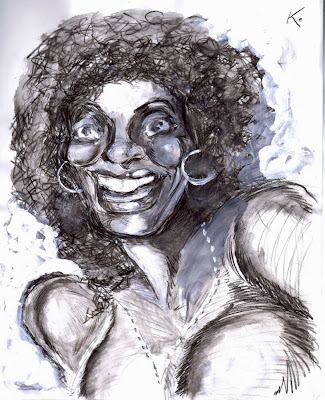 COPYRIGHT 2014 BY MILTON KNIGHT
Posted by Milton Knight at 2:11 PM No comments: 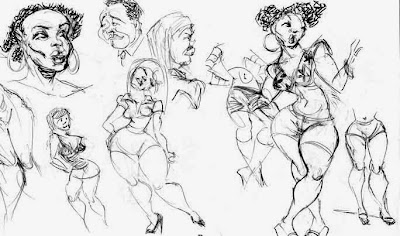 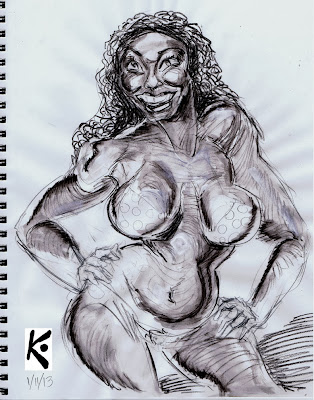 COPYRIGHT 2014 BY MILTON KNIGHT
Posted by Milton Knight at 8:58 AM No comments:

TOONS OF THE ORIENT 3 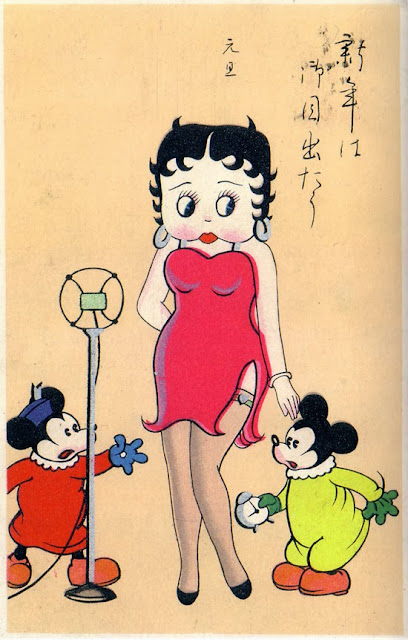 Asiatically Yours-MK
Posted by Milton Knight at 8:20 PM No comments: 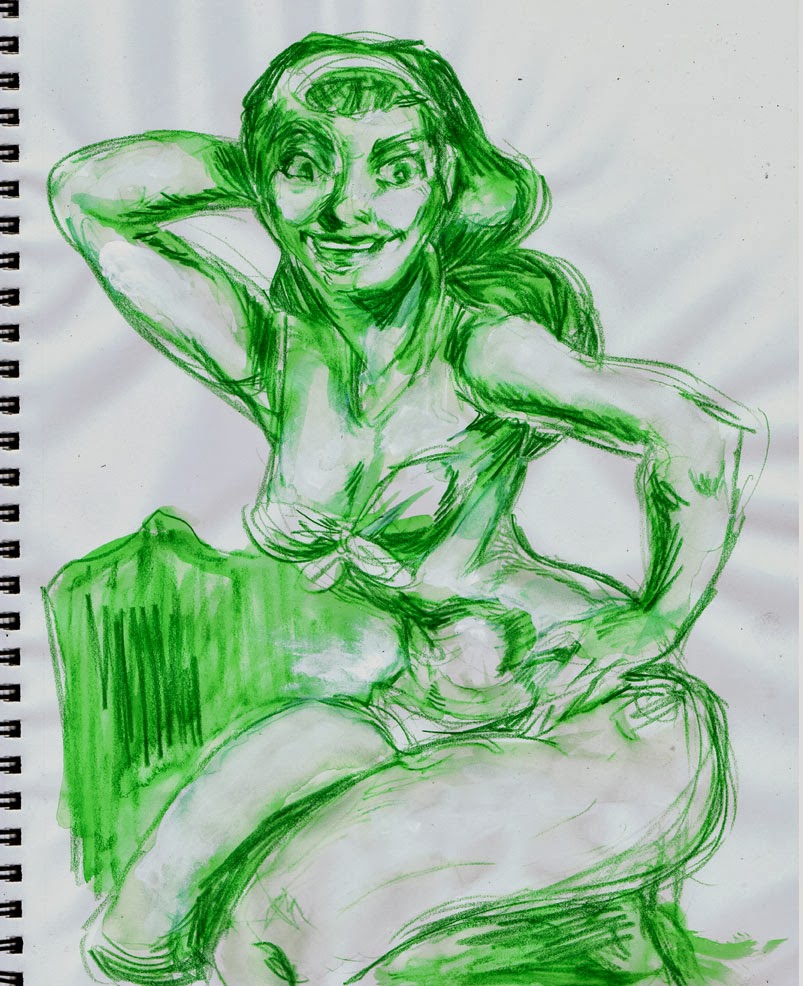 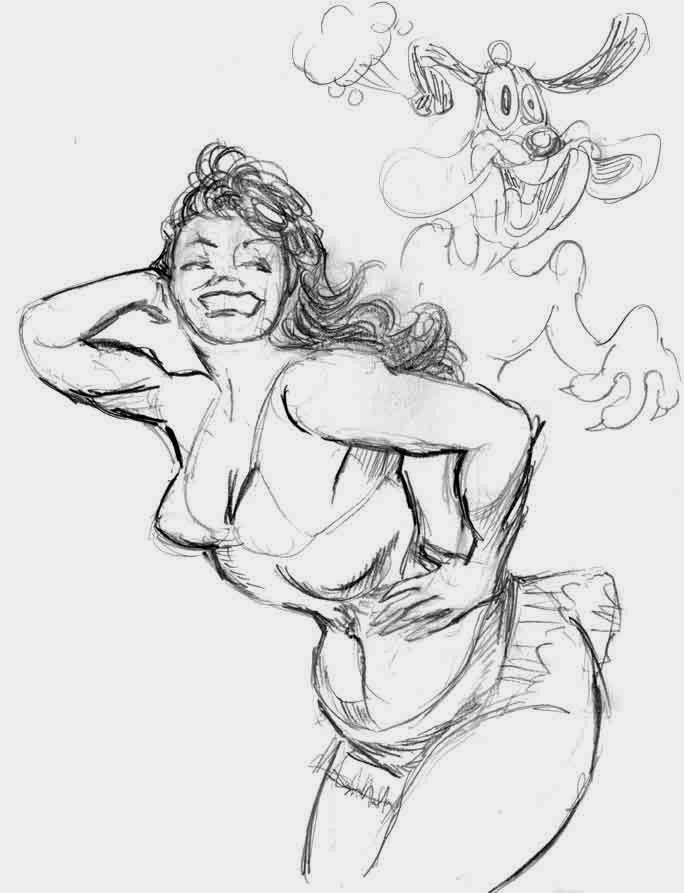 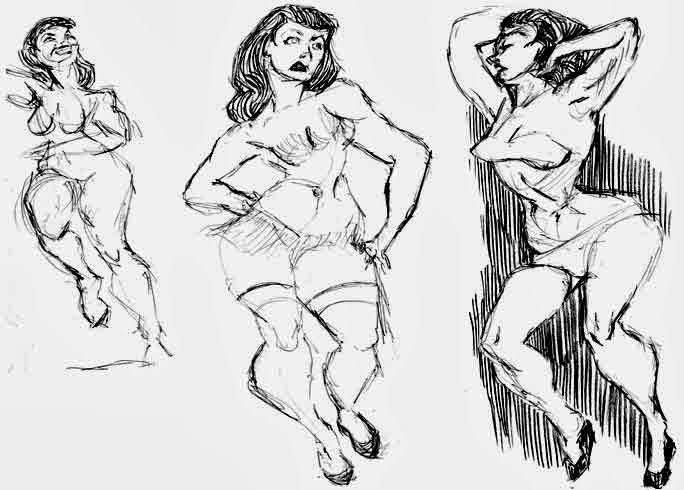 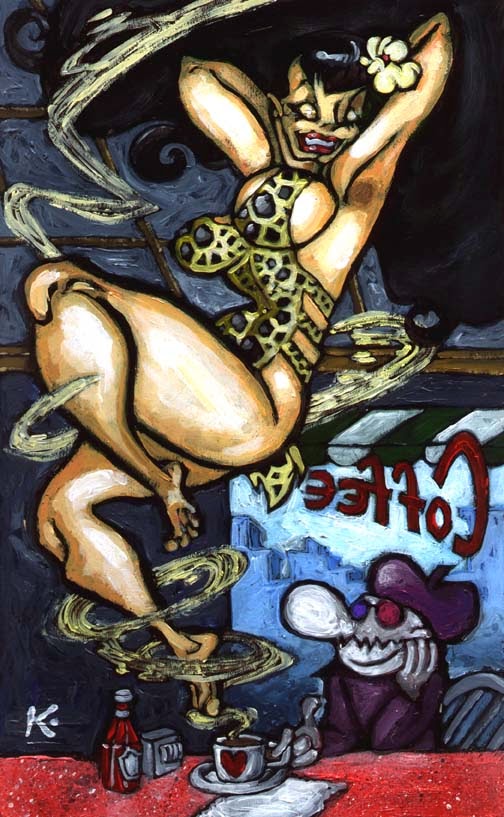 COPYRIGHT 2014 BY MILTON KNIGHT
Posted by Milton Knight at 3:35 PM No comments:

LOOK BACK IN FELIX 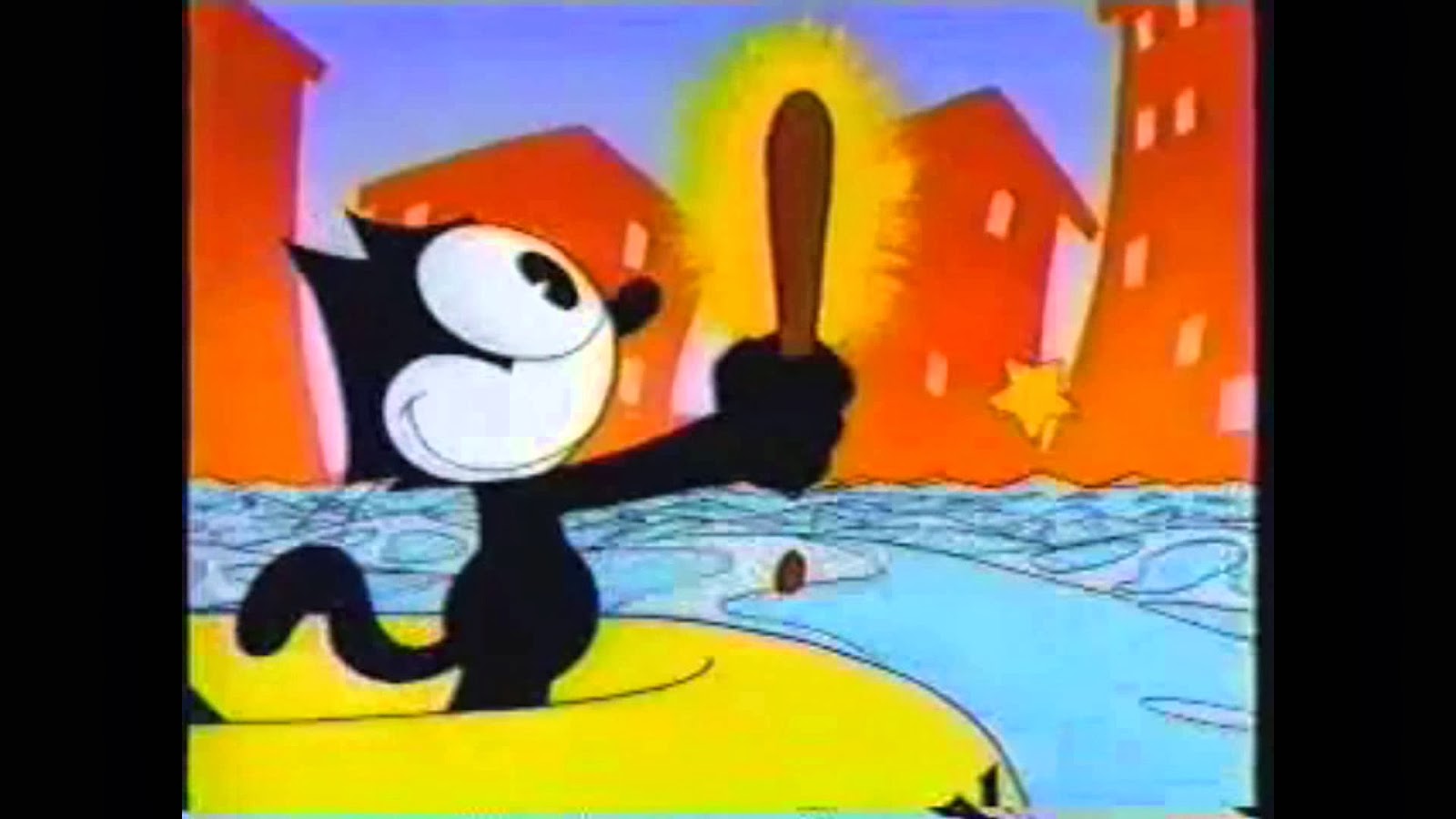 A clever person has posted FOREVER RAFTER, one of the Felix shorts I directed in REVERSE. It's...totally weird! http://youtu.be/c9NdaCnA9zQ

COPYRIGHT 2014 BY MILTON KNIGHT
Posted by Milton Knight at 4:38 PM No comments: 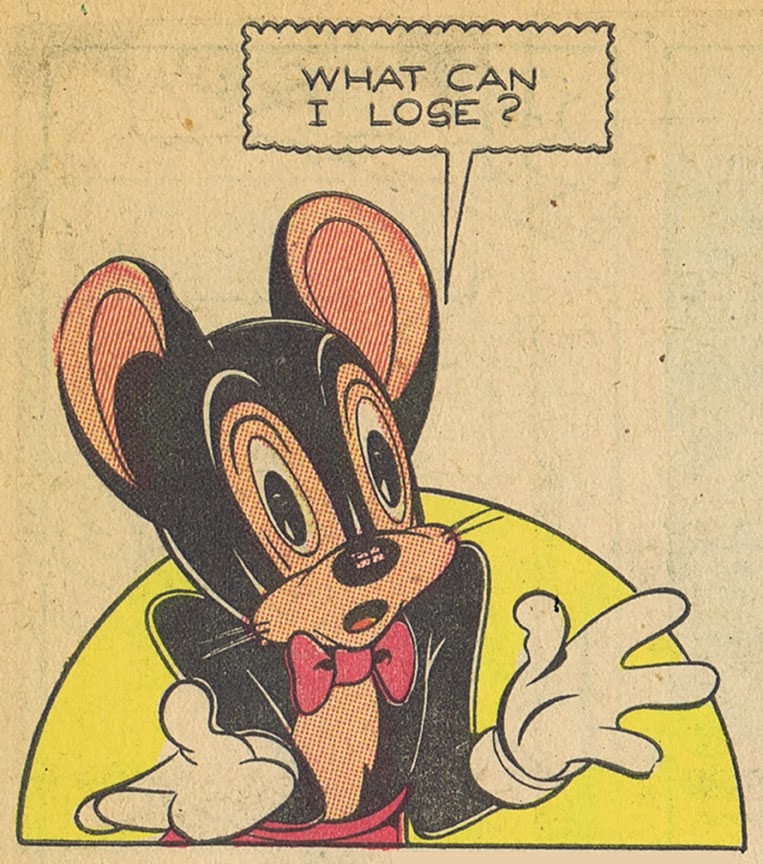 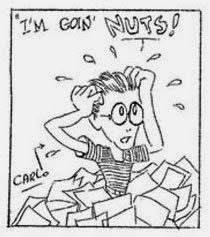 The moment I saw the Jekyll-and-Hyde panels below, my artistic vision was forever altered.


Carl O. Wessler's (1913-1989) name is usually associated with his writing for EC horror comics. In fact, he had a colorful career that went back to a job at the Fleischers in the mid 1930s, which continued in after the strike disputes (he had been a union organizer) and later back to . Throughout the early 1940s he freelanced humor comics work (even “teenage” comics!). He had affinities for war and horror scripts as well, beginning in the 1950s. Into the 1970s, he scripted for and Marvel. 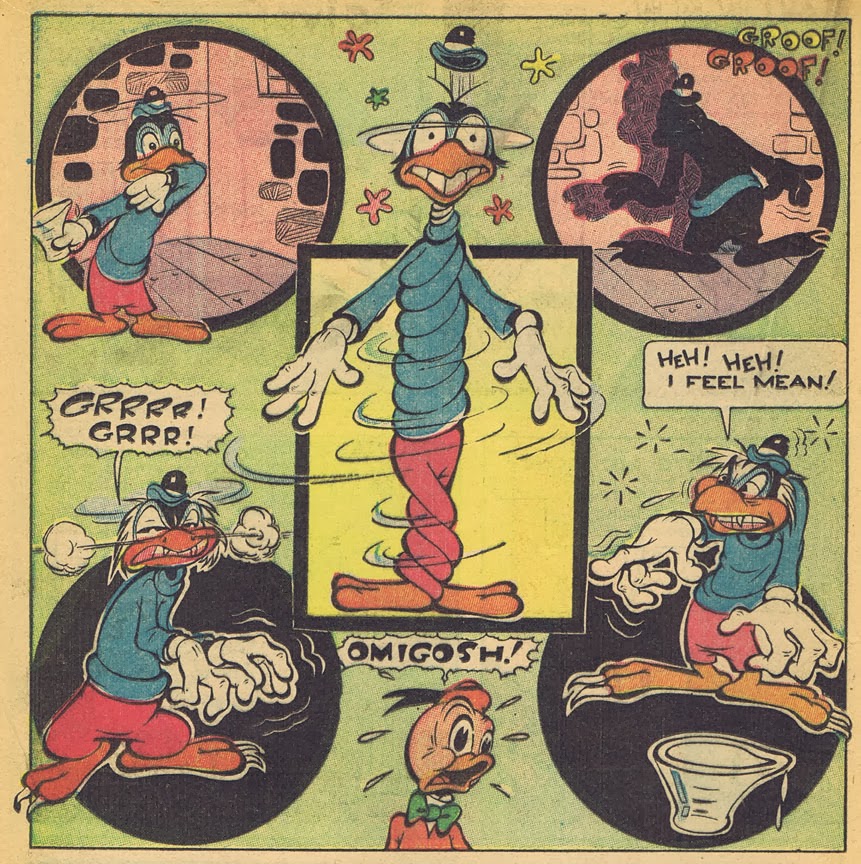 Collecting in the late 1970s, I was familiar with Carl Wessler's earliest wartime funny animal (called then "animation comics") work for the publisher Pines. Much of it was substandard. After the war, it became polished; it had a slapdash, improvised look that thrilled me as a kid. It suggested a "camp", perverse DISNEY'S COMICS AND STORIES. The dialogue could be wry and a little bitter ("I've tasted worse, but I've forgotten where!") Both characters and settings were playfully pliant and soft. You got the feeling he never used a ruler. He used decorative motifs for their own sake. 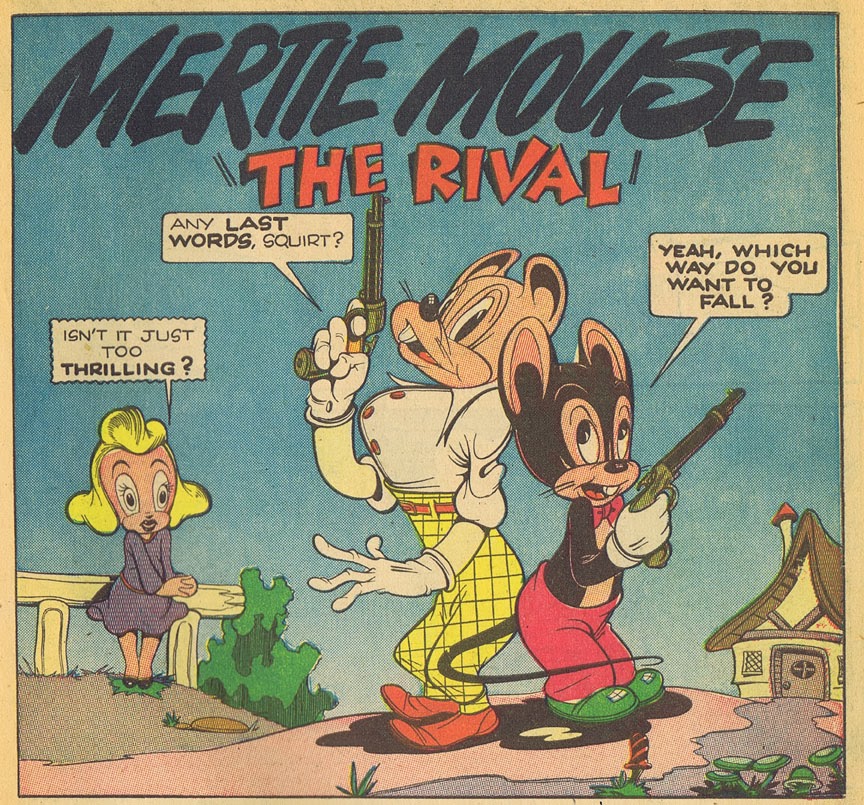 He worked for the major publishers as well as a galaxy of dinky ones. People often wonder why cartoonists would move between large studio “prestige” and comic book “slumming”. Wessler himself recalled that in 1946, he could do three covers in a day for $50 each and take off for the rest of the week. The fact that an artist's work could shine on its own must have been an additional pleasure.

The “Jekyll-and-Hyde” panels are from a Timely-Atlas comic, ALL SURPRISE, 1946. The rest are from TOYTOWN, from the same period. 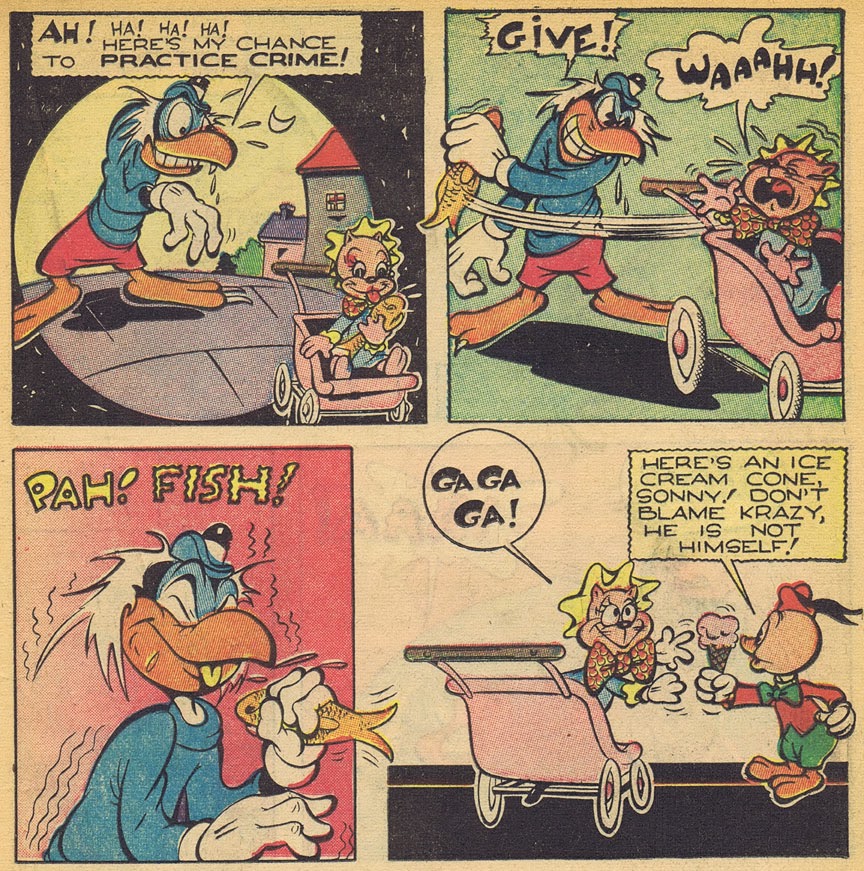 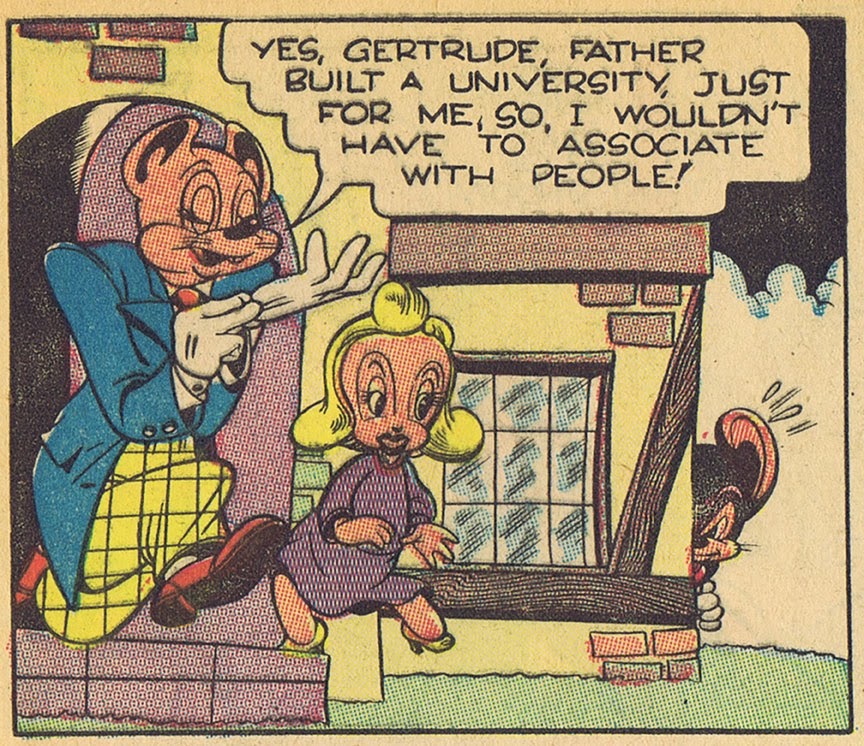 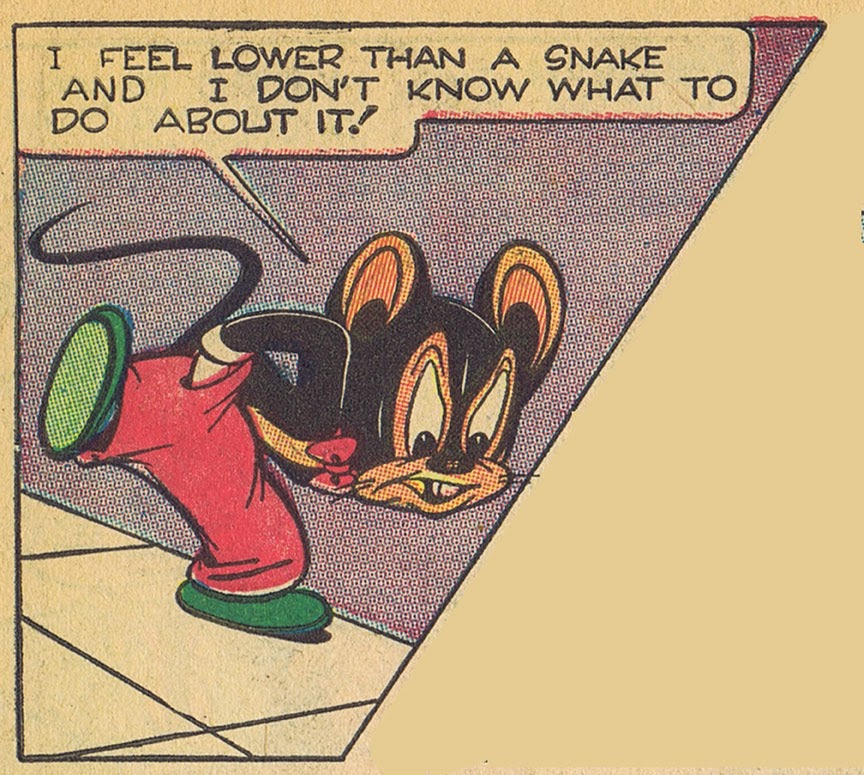