Putting my fondness of Vienna Secessionist designers like Kolo Moser to use. 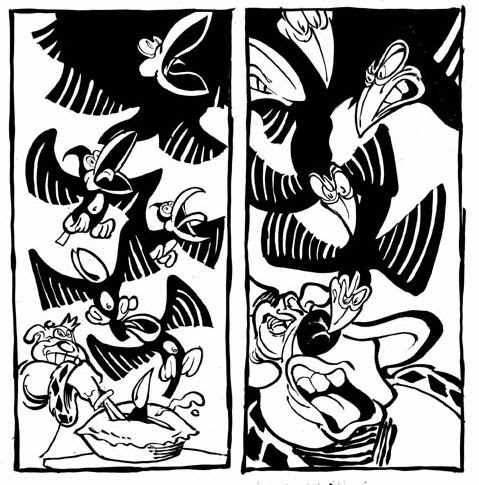 I want my art to look like the stuff I love in antique malls but cannot afford.
Posted by Milton Knight at 11:17 AM 1 comment:

CONFESSIONS OF A SEX CARTOONIST

I did not start putting ‘sex’ in my art to make money; I wanted to do it. I’m good at it. It comes naturally.

You can believe it or not, but ever since I was a kid (late 1960s) I wanted to do 'adult' cartoons. It was early viewings of cocktail napkins, magazine gag cartoons, and the subtly voluptuous women of the cartooning manuals that did it. I wanted to be the boss chasing the secretary around the desk! 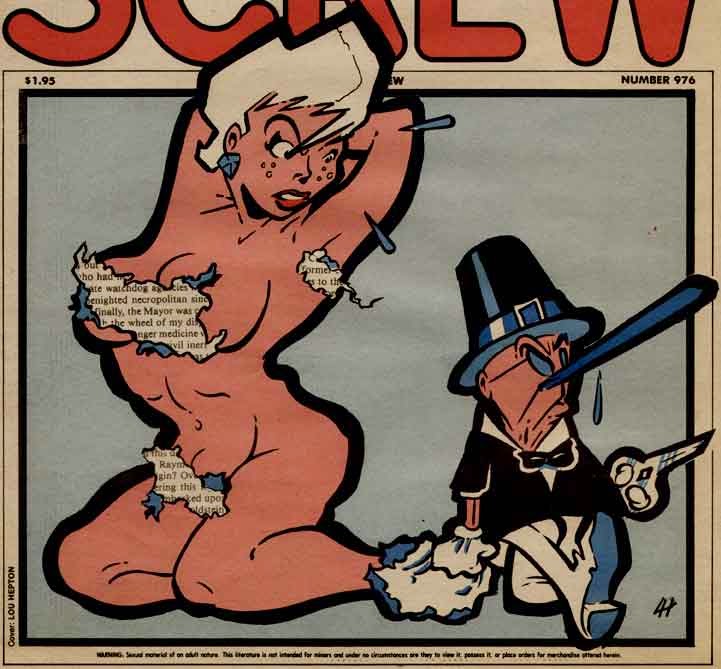 I see sex as a very important experience in the characters’ lives. It can be comic, sublime or grotesque; it can strip their inner workings bare as well as their outer ones.

The comic book atmosphere in has become a lot more uptight. While the “serious” ones are turning more violent and depraved, sexual situations in the humorous are “unclean”; confined to the inane “jerk off” books.

While the idea is touted that comics aren’t just for kids anymore, they still haven’t really “grown up”.
Cordially Yours, MK
COPYRIGHT 2014 BY MILTON KNIGHT 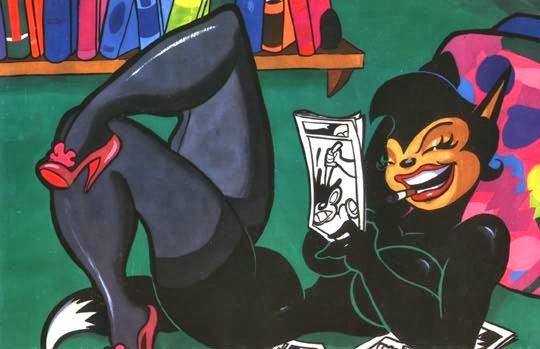 Posted by Milton Knight at 7:27 PM No comments: 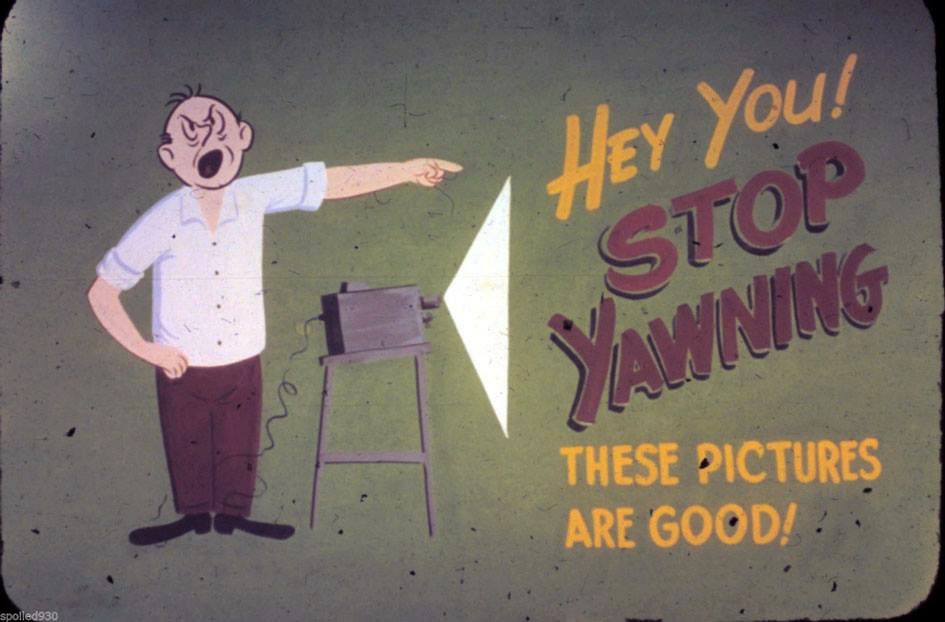 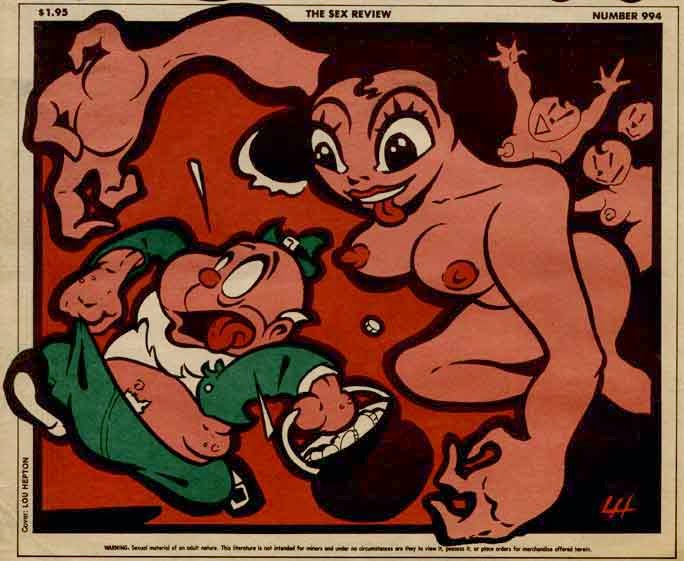 COPYRIGHT 2014 BY MILTON KNIGHT
Posted by Milton Knight at 6:18 PM No comments:

Three items from my sketchbooks age 17/18. First, a fragment. 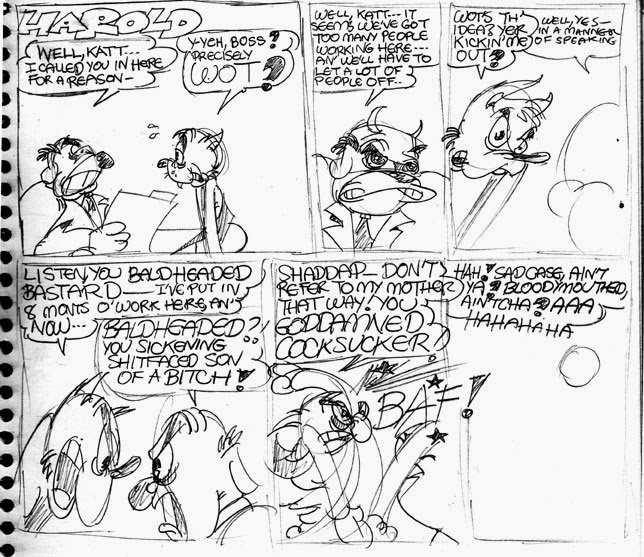 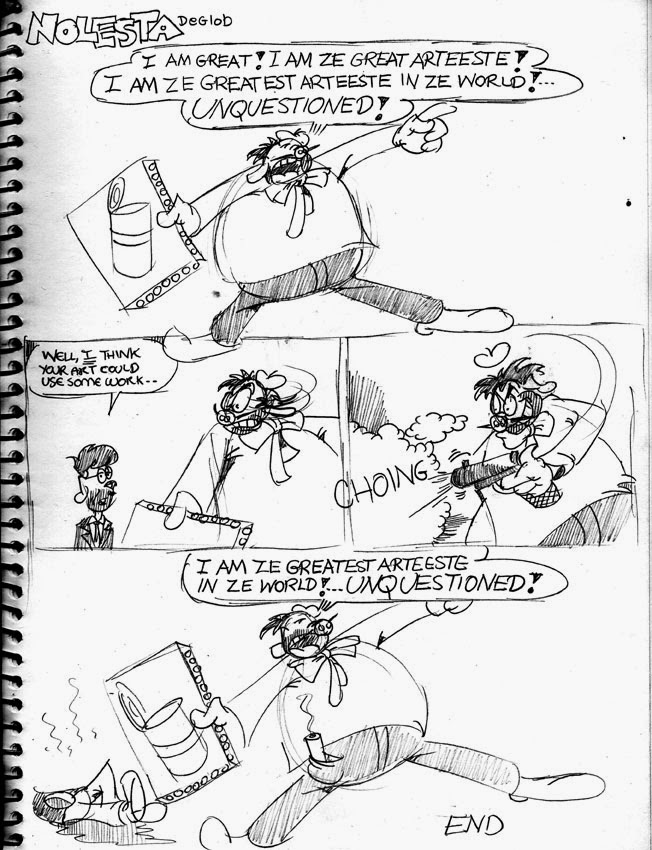 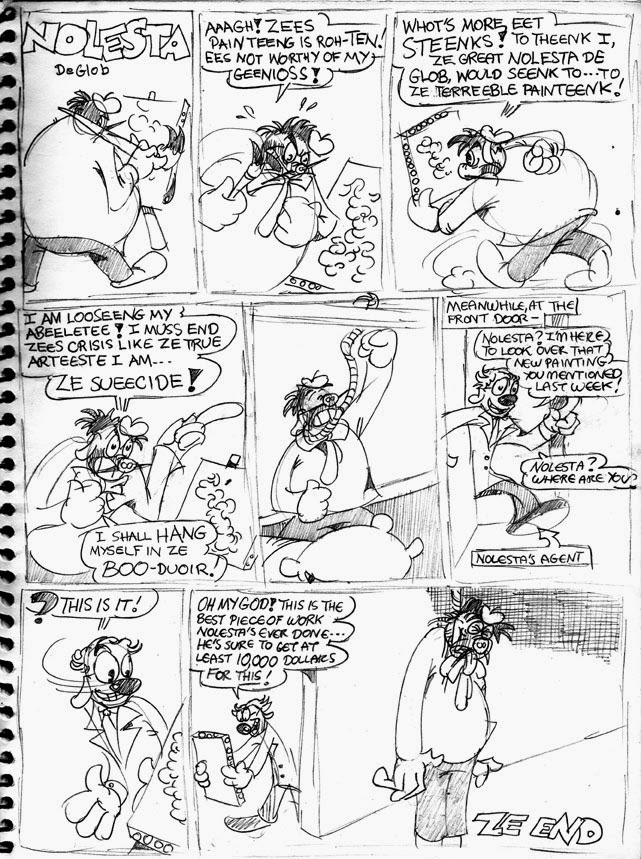 COPYRIGHT 2014 BY MILTON KNIGHT
Posted by Milton Knight at 8:14 PM No comments:

"Even today these stories and style, though out of fashion, but not gone. Milton Knight is perhaps one of the last comic artists, which can be safely dubbed heirs underground. «Midnight the Rebel Skunk», «Hugo», «Slug and Ginger» - his brainchild. Crazy cartoon graphics and insane plot nedetskiy become the hallmark of his work."

"Today, I have a day Milton Knight .
Horrible nigra completely nepriemlyuschaya escapism in kartunizme, Bakshi worked with over the "cool world" and works with prushchego Victor Lyapkalo .
Draws as breathing, and breathing loudly .
Finally downloaded it Slug 'n Ginger and used the under portveshok. Ah what I am now pleased.
Bright Shard old school.

From an autographed book I was given by a Russian cartoonist, Mikhail M.....? (at a cartoonists' conference in Hungary, 1990). If you can't read it, it says: "To the Big Black Milton with the Greatest Wishes." 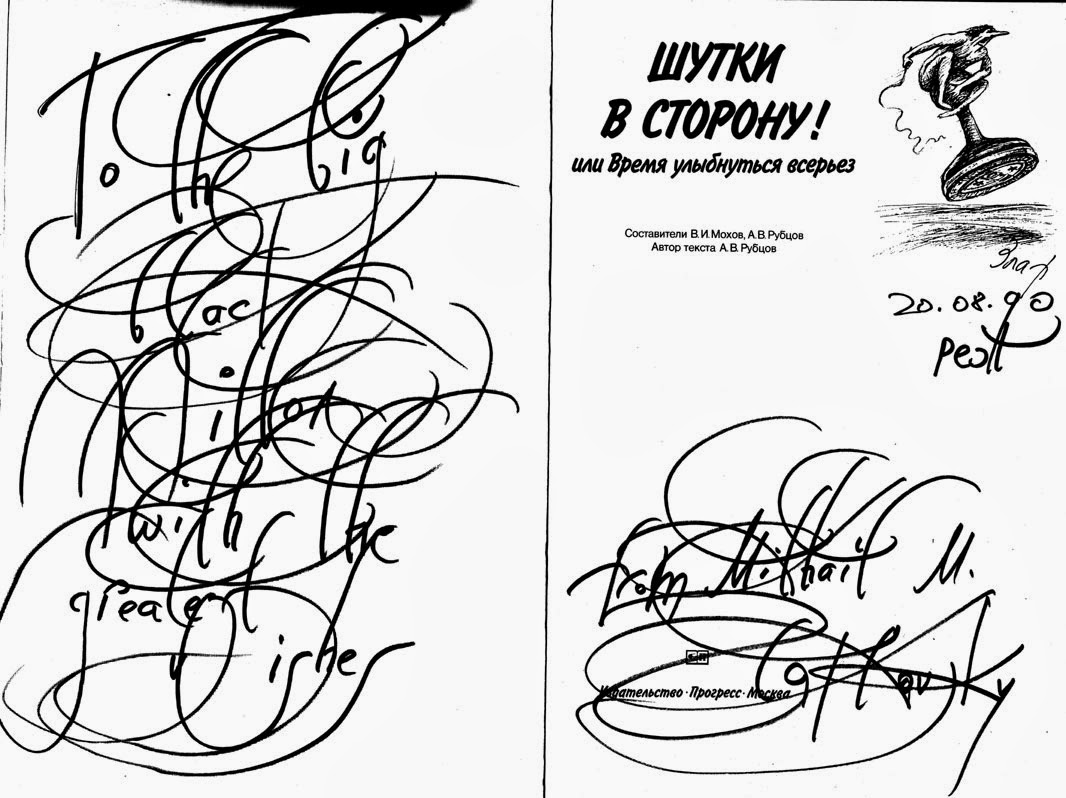 Illustration that appeared on the cover of the 1997 ASIFA-Hollywood "Annie Awards" program. The zoetropes are the organization's emblem. 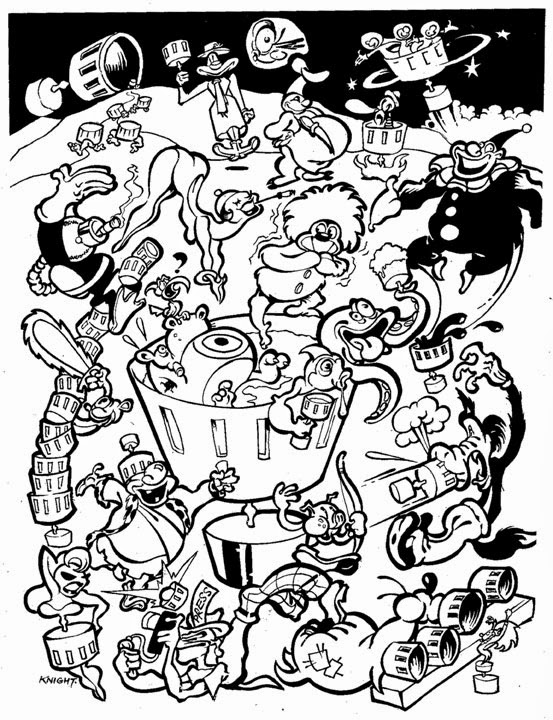 COPYRIGHT 2014 BY MILTON KNIGHT
Posted by Milton Knight at 9:16 AM No comments:

In a recent post I wrote of my three-month, early 1980s stay at Manhattan's Jane West Hotel. It originated as a home for seamen in distress. By the time I arrived, it was a seedy home for transients. Since, it has undergone a common New York transformation into housing and night life for the wealthy. Here's a 2008 news story about its changeover pains:

And here, the battle lost; the hotel's (now just "The Jane") fate as a haven for trust fund kids.

So there you are. No nostalgia here, just the bitter taste of injustice.-MK

COPYRIGHT 2014 BY MILTON KNIGHT
Posted by Milton Knight at 2:08 PM No comments:

More art from my unproduced cartoon, CAPRICE, TEEN OF TOMORROW!

Here, a series of proposal drawings done when I first began drawing the cartoon and peddling the idea in 1997. 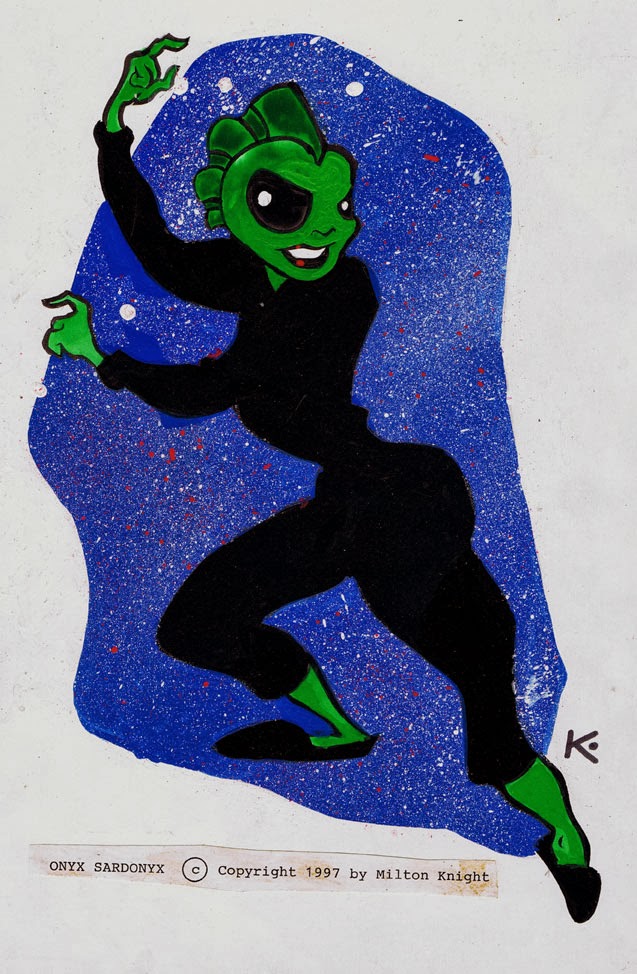 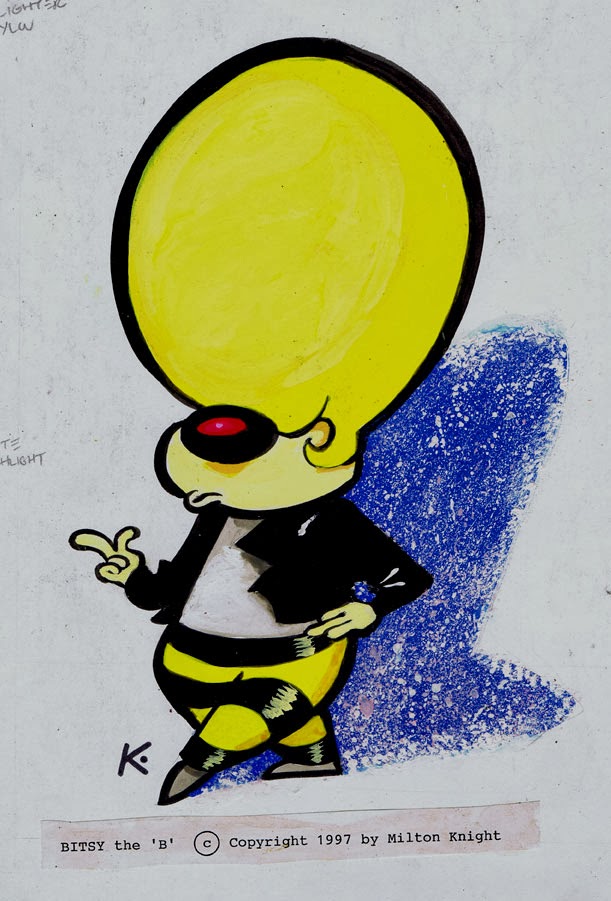 Below, a letter quickly and informally written on the vagaries of its production. I post it here not as a mere sob story, but as a document of the period when computer technology was rapidly moving in on drawn animation and the studios running amok in a bid for an unknown survival. The standards of professionalism were becoming blurred; these were the days of unpaid "pitch-a-thons" and free options. The number of unpaid internships was increasing. Then, unpredictably, came CGI...

My film, CAPRICE, TEEN OF TOMORROW, has had a long and tortured history.
Begun conceiving in 1997, when things (1) started getting "headless" in the animation industry, and (2) I needed a project to lift my spirits. A "portfolio piece" that would show what I really was capable of, not filtered through the system & overseas finishes.
One studio was interested, but only if I gave them a free option for several years to monkey with. Another businessman was interested, but kept having heart attacks. 1999: Baer Animation agreed to provide access to their studio to finish it. 2000: Baer shut down, Same year, I began paying Playhouse Pictures out of my own pocket to shoot several minutes of scenes in color. They slowly closed, too. (That’s what was happening to the majority of trad animation houses at the time. Crippled by spending on computer equipment that quickly outdated, they were closing one by one, usually not making official announcements.)
Jobs were slow, I was pretty sick with depression, and kept animating because I wanted to, even though the “portfolio piece" reasoning was moot, there no longer being much of an industry for “drawn” animation.
2002: While comic work picked up somewhat, an animation college teacher friend egged me on to finish the drawings, claiming it would be an “easy thing” for his students to do the color and camera (even though I warned him it might not be). I scanned and sent him scenes, and it was a three year period before he’d admit he just wasn’t capable.
Kept going in my spare time anyway, making changes as I worked. In 2010 (?) tried a Kickstarter campaign, didn’t go (and will not try doing it again, the unfulfilled promises are too painful). So the project’s still in my lap, may never be finished.
On the positive side, I've learned an incredible amount with the work I've done; I can draw characters in any pose or angle with skill; editing; and I really knew little about animation timing before this project. All of this has benefitted my work in other areas. One day I may begin something else, a project that can be more credibly completed by one person. 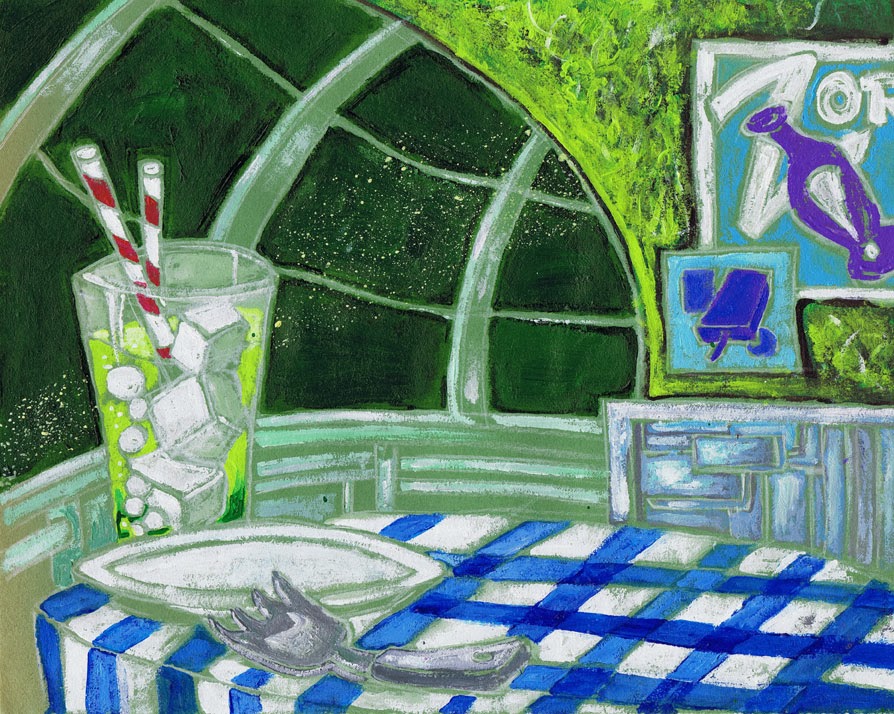