When marketing a novel, agents and publishers generally want to see the first three chapters. So I figured, what the heck, I'll spring them on you, too. Your comments will be appreciated.


Chapter One: SETTING THE STAGE

He shrugged, changed suits, threw on his knee length tweed coat and left by the back alley exit.

Mona Fago, the stage manager, opened the windowed door of her business office, and kept walking until behind her desk. Wheezy, still in his ludicrous costume, followed her in and closed the door, happily anticipating more than the gin Miss Fago noisily fumbled for in one of the drawers.
A single, yellowed bulb inside a rusted tin cone hung above the desk. Only the nearest edges of the office paraphernalia could be discerned in the greenish light. The olive blotter on the desk. The blue grays of file cabinets. The washed out whites of the piles of papers and contracts, the muddy melange of photos and posters hanging on the walls. However, a spray of moonlight was thrown upon a cot at the opposite end of the office reserved for Mona’s off duty “siestas”.
Wheezy reached for the wall switch for further illumination. “Don’t do that”, Mona blurted.
It was possible she didn’t want to break the mood. It was also possible she wanted her face to remain unseen. She must have been over forty, but she still had what it took as far as Wheezy was concerned. Her face was in shadows, but the dull bulb highlighted her pointy breasts and the bottle of gin.
“Drink with me”, she said without expression or pleasure as she poured two glasses. The sound of the liquid was clear and delicious. Wheezy picked up his glass, sat across from her in the rickety swivel chair and sipped.
After a pause to savor the taste, Mona said gently, “Stop picking on Paul.”  It sounded like a gesture of obligation, not concern.
Wheezy snorted. “Pick on him? On him…did you see us out there tonight? He could have killed me!”
“Oh, stop being a crybaby, Wheezy. A few extra smacks with a pig’s bladder. A balloon! Is it or is it not you who tells him to keep it violent? You’re strong. You can take it with the best of them. That’s why you’re a winner. And you know Paul can’t take your outbursts, loser that he is.”
Wheezy turned his drinking glass from side to side, studying its reflections, and chuckled to himself. He liked Mona, and not just as a nice piece of tail, as he felt about most decent looking females. She had a good sense of humor. And a capacity for frankness. You didn’t have to choose delicate words with her. Sure, she acted like a stick. But one had to be tough to stay in her business. Her po-faced demeanor made it clear that she wouldn’t court any nonsense. Her jaded expression, the hair worn in a tight bun, her cat’s eye glasses, her tailored suits and the clipped rhythm of her clacking heels conveyed that well enough. But the turtleneck sweater she was wearing close to her, and the banana breasts peeking out from under the jacket, warmly suggested a good time could be had. And, oh, the two of them had enjoyed some good times. But off of that cot, it was all business and only business. Sex partners received no favors.
For her part, Mona felt no cause to give Wheezy any favors. He was breezy, agreeable enough to dally with, but he was no friend. He was an unpleasant little mental case, she felt. At his best, abrasive. At his worst, an egoist son of a bitch. In his clown suit, he was a repellant sight. Out of the suit…well, he had an alright body and an impressive member.
“You wanna talk to me about somethin’, Mona?”
“We’ve talked. I WANT…a siesta.”

Paul St. Clair walked down the alley from the rear exit. The globe of light beside the door set the pebbled, moist brick walls glistening. The alley was intimidating, but the crew, even the dancers, had grown used to passing through it to the street. There had never been a problem, except for an occasional wino…
“What do you say, Skipper? Gotten good right Friends with God Jesus?”
It was Beautiful Joe, a vaguely nautical regular at the club, who came and watched the show every evening he could afford to, and tried to proselytize the cast after it ended. He wore a dark seaman’s jacket, a striped t-shirt, and rough jeans, hard with crust from lack of a wash. From under his cap, his gray hair and beard flew out of his head in every direction, giving him the appearance of a wounded yet noble porcupine. One of the Lord’s own oddballs.
“Jeez, Joe, you scared the hell outa me.”
“Just what I want to do, son. Well, how about it. Joined the denizens of Jesus Christ, our Lord of America??” Joe insisted on walking at Paul’s side as he continued up the alley.
Paul felt some empathy for this well-meaning eccentric, but was irritated by his pressuring. Paul was simply not interested. Looking pained, he said, “Look, Joe”, he said, “You know I’m a believer, but I can’t dedicate my soul to it. I’ve got too many questions.”
“Ask the Lord, and he shall forgive them, Pappy. All you need is some spiritual food, and that’s free; anywhere, anytime. Let me tickle your tastebuds.”
Joe was getting poised for one of what he considered his “masterful” diatribes. Paul nipped that in the bud. “He shall forgive me, you say. Why is having a question an error on my part? Isn’t the Lord all-knowing enough to recognize that so many things about the world He created are going unexplained? That His world to us makes no sense whatsoever? That it hurts just to be here?”
“As you say, Paul-o, He made the Earth. And so there are no questions. Come; let me take you on the merry-go-round that is Our Lord, Jesus Christ.”
Merry-Go-Round was right. There was nowhere to go with this clod. Paul was losing his patience. He fumbled in his pocket, and laid a coin on the old man’s palm.
“Thanks, Paul-o, bless you. I shall pray for you. I shall use this money to lead others even less enlightened than you on the Path to Glory. Hallelujah, Brother! And then some…” His words faded into the distance as Paul walked out of the alley.
As he approached the stairs of the subway, Paul couldn’t help but consider that the fifty cents he had just “contributed” would simply be used to finance another grape soda at The Candl Club.

COPYRIGHT 2017 BY MILTON KNIGHT
Posted by Milton Knight at 5:58 PM No comments:

MY ARTICLE ON CARTOON RESEARCH 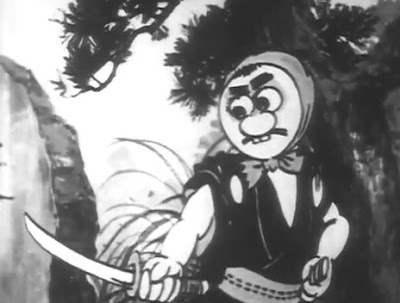 "He excelled in the creation of animation with historical themes from a land where using cartoon forms such as large eyes and noses to convey serious emotions and stories was not so strange. Kimura’s characters are anatomically believable, even studious, but rendered in a high graphic style steeped in Asia’s long tradition of humorous brush and ink painting. There is often a striking modernity in his art..." 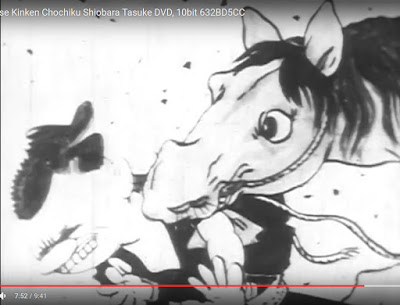 Posted by Milton Knight at 8:12 AM No comments: