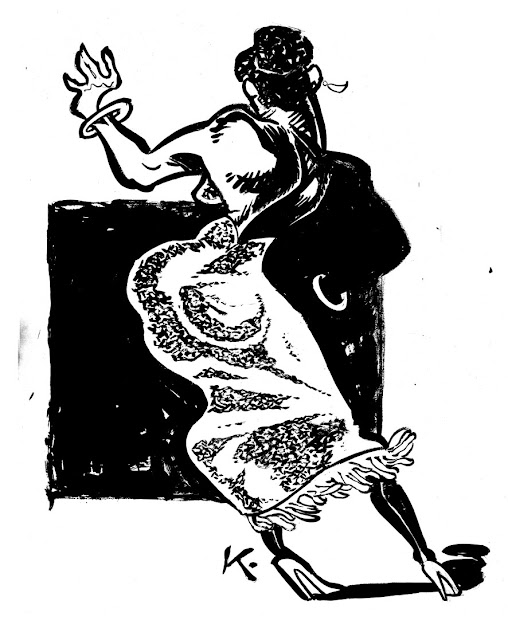 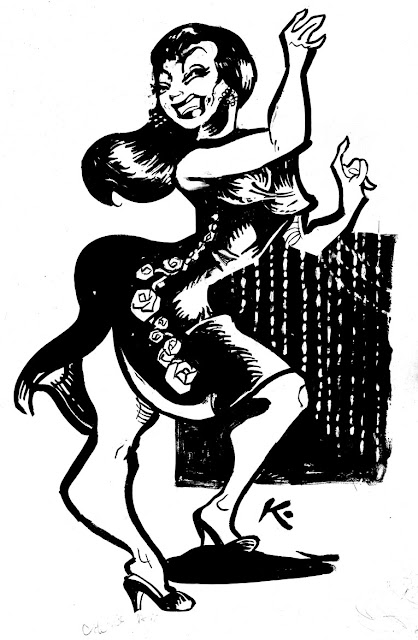 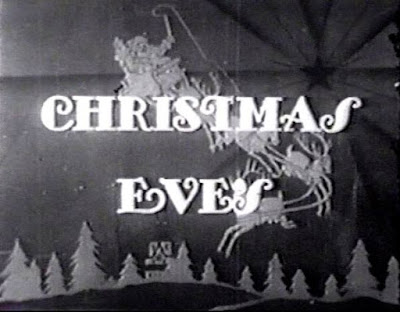 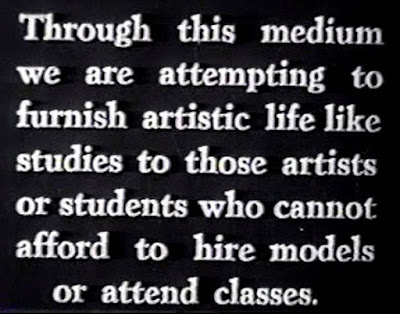 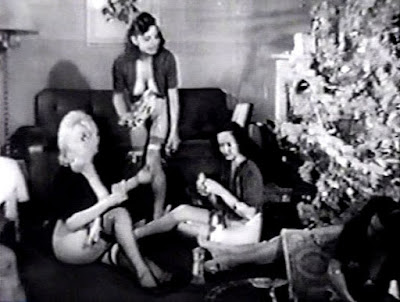 Posted by Milton Knight at 6:56 PM No comments:

From my novel, now in its fifth draft: Entertainer Paul St. Clair walks home from the club.

The alley was intimidating, but the crew, even the dancers, had grown used to passing through it to the street. There had never been a problem, except for an occasional wino…
“What do you say, Skipper? Gotten good right Friends with God Jesus ?”
It was Beautiful Joe, a vaguely nautical regular at the club, who came and watched the show every evening he could afford to, and tried to proselytize the cast after it ended. He wore a dark seaman’s jacket, a striped t-shirt, and rough jeans, hard with crust from lack of a wash. From under his cap, his gray hair and beard flew out of his head in every direction, giving him the appearance of a wounded yet noble porcupine. One of the Lord’s own oddballs.
“Jeez, Joe, you scared the hell outa me.”
“Just what I want to do, son. Well, how about it. Joined the denizens of Jesus Christ, our Lord of America??” Joe insisted in walking at Paul’s side as he continued up the alley.
Paul felt some empathy for this well-meaning eccentric, but was irritated by his constant harassment. Paul was simply not interested. Looking pained, he said, “Look, Joe”, he said, “You know I’m a believer, but I can’t dedicate my soul to it. I’ve got too many questions.”
“Ask the Lord, and he shall forgive them, Pappy. All you need is some spiritual food, and that’s free; anywhere, anytime. Let me tickle your palate.”
Joe was getting poised for one of what he considered his “masterful” diatribes. Paul nipped that in the bud. “He shall forgive me, you say. Why is having a question an error on my part? Isn’t the Lord generous enough to recognize that so many things about the world He created are going unexplained? That His world to us makes no sense whatsoever? That it hurts just to be here?”
“As you say, Paul-o, He made the Earth. And so there are no questions. Come; let me take you on the merry-go-round that is Our Lord, Jesus Christ.”
Merry-Go-Round was right. There was nowhere to go with this clod. Paul was losing his patience. He fumbled in his pocket, and laid a coin on the old man’s palm.
“Thanks, Paul-o, bless you. I shall pray for you. I shall use this money to lead others even less enlightened than you on the Path to Glory. Hallelujah, Brother! And then some…” His words faded into the distance as Paul walked out of the alley.
As he approached the stairs of the subway, Paul couldn’t help but consider that the fifty cents he had just “contributed” would simply be used to finance another grape soda at The Candl Club. 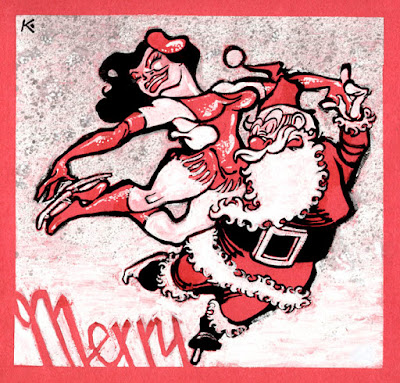 HAVE A MERRY ONE, THEN! 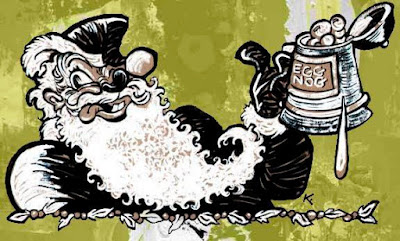 May all your dreams come true. 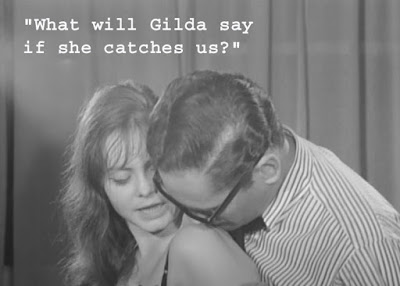 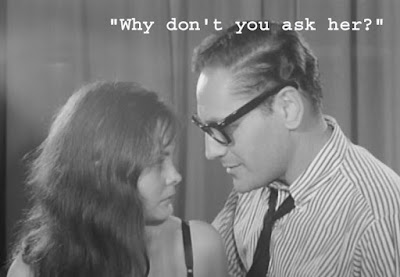 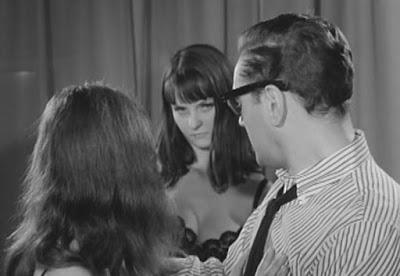 COPYRIGHT 2015 BY MILTON KNIGHT
Posted by Milton Knight at 2:53 PM No comments:

No one is "born" with the ability to love. It's not an instinct. It's not a matter of being intelligent or skillful. It has to be handed down. It has to be learned. If a person doesn't get it, chances are they won't know how to give it.
Posted by Milton Knight at 12:08 AM 1 comment: 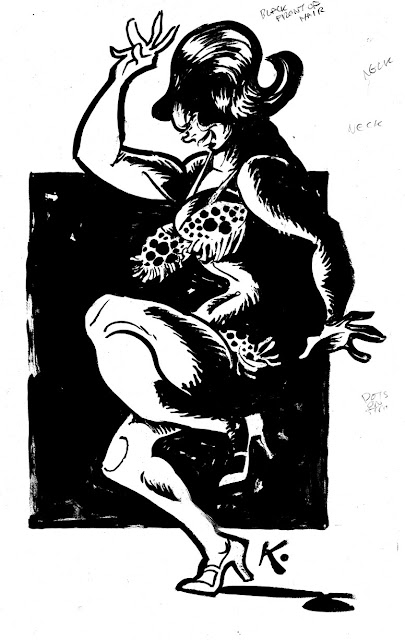 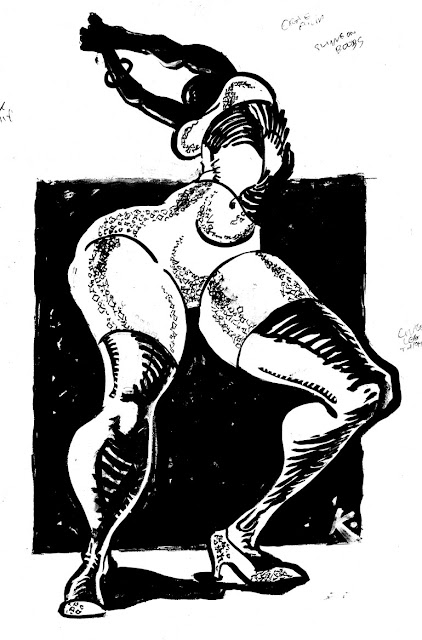 Wheezy Gibson badgers Mona, his boss, into making a decision.


Wheezy Gibson employed his own methods of persuasion. He was very conscientious about doing his best work in Mona’s bed. Afterward, uniquely, Mona was content to linger there, purring like a kitten, absently rolling her pelvis in happy memory, her cunt slippery and wet. Her arm rested over her forehead, her hair free and cascading over the pillows. Up on his elbows, gnawing his cigar, Wheezy continued his nagging. “Come on, Mona, give the kid a break!!”
Barely getting a response except for a sigh of bliss, Wheezy cunningly raised his hand to his mouth, generously licked his fingers and ran them up Mona’s slit, provoking a loud, delicious slurp.
Mona flung her head back and shuddered as the comedian’s hand slid up and down, making her cunt gurgle and smack. Her pupils obscured, she croaked in a delirium, “Oh, God, Wheezy. Do you want to kill me? You do…you do want to kill me…” Her tears flowed, but she was almost laughing. “You want to kill me.”
Wheezy had rolled his small body on top of her, once more wrenching and pumping his way into her heart. It took all the energy Mona had just to fling her legs around his waist.
Wheezy’s methods were working. Mona gave the matter more serious thought.


COPYRIGHT 2015 BY MILTON KNIGHT
Posted by Milton Knight at 12:19 PM No comments: 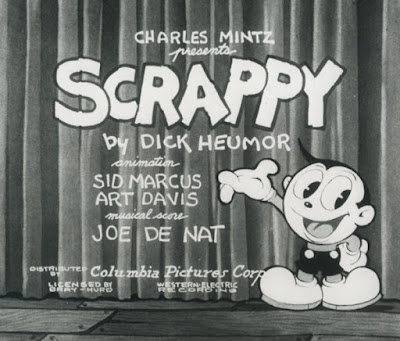 "Scrappy" was a character created by Dick Huemer (a terrific artist who had played a big hand in making MUTT & JEFF and OUT OF THE INKWELL cartoons) in 1930 for the Charles Mintz studio, released through Columbia Pictures. The series ran a good long time for a Mickey Mouse competitor, ending in 1941.


YELP WANTED (1931): Scrappy's debut. The original concept was of a child (not just a tiny adult) in comparatively believable surroundings, and trying a little tenderness. 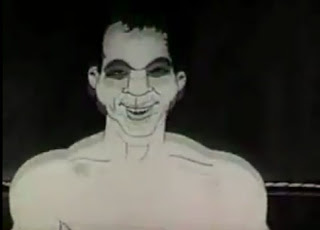 SCRAPPY'S BIG MOMENT (1935): The child's match against Max Baer. Dynamically directed by Ben Harrison. Very rich animation that amazed me as a youngster (I owned an old, silent 8mm print). I found old cartoons (specifically Mintz's and Fleischer's) such a feast. There was nothing like watching silent early Popeye cycles moving slower than they were originally meant to!!  (Click image.)


Visit his official website while you've still got Scrappy fever!! 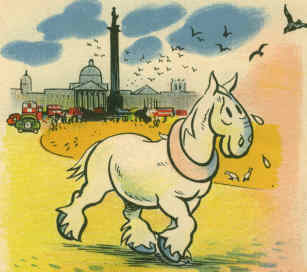 Not much for me to add here. This modern day video tells the short story of the start and finish of Davies' short-lived studio in the 1930s, and its star, Steve the Horse..


The first of the series, and possibly the best. Spoilsports will whine about the crudeness, but this is quite good considering this is a film done practically solo by a first time, self taught animator (and without pencil tests) at a time when the art had still to be mastered.

Click image below to visit this YouTube channel with *all six* of Davies' films in this crude, bold venture! 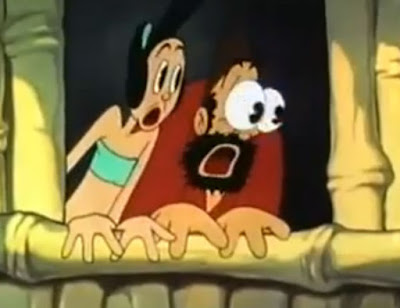 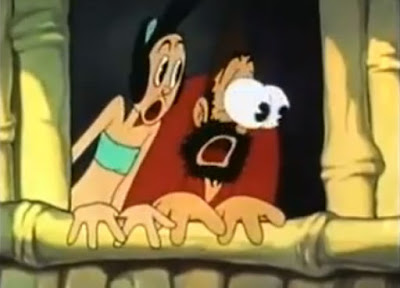 New York 'takes' were intended to be Tex Avery 'takes', but they'd be on the screen about four times as long. 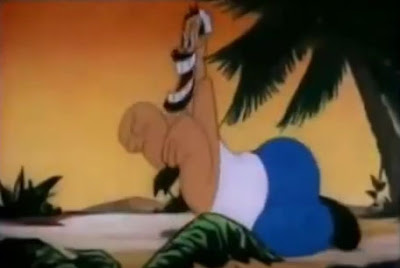 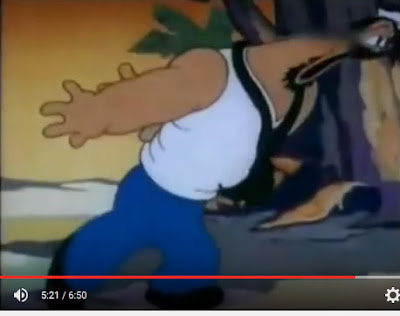 When a character's head stretched, what does it mean to you? 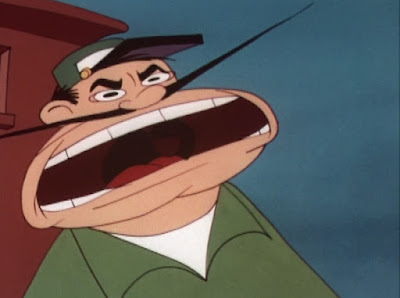 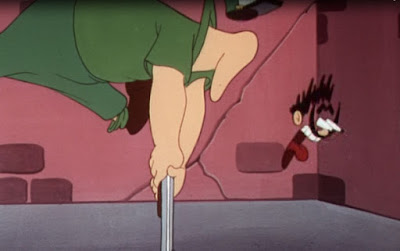 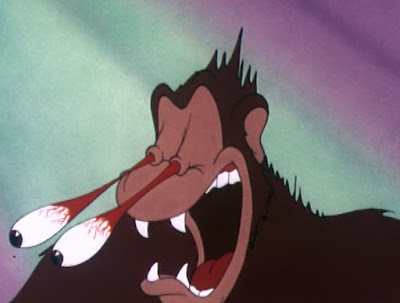 O BROTHER, WHERE ART THOU??

This isn't "building" into a race war. Whatever the number of deaths, it *is* one. But nobody wants to address the issue until there are tanks and trenches. I repeat: "Why doesn't Obama f------ say something??" I mean it.

Without an answer, I can only assume the worst: that he's a wishy washy doormat who talked big but makes Uncle Tom look like Hercules.

He had chances...two of them. He was elected twice, laid on his back both times trying to play "bi partisan" with people who wanted to kill him, and GAVE THEM TIME. Now he says horseshit like "carry on". Meaningless Mad Ave. drivel.

Just address it. Just to show he's even thinking about it. He's letting my race DOWN, and it's worse every day. A president...unable to address a race war because he must "make compromises"? NO. I don't buy it.

Say something. Now. Even if it "solves" nothing, it means a lot.

Posted by Milton Knight at 8:33 PM No comments: 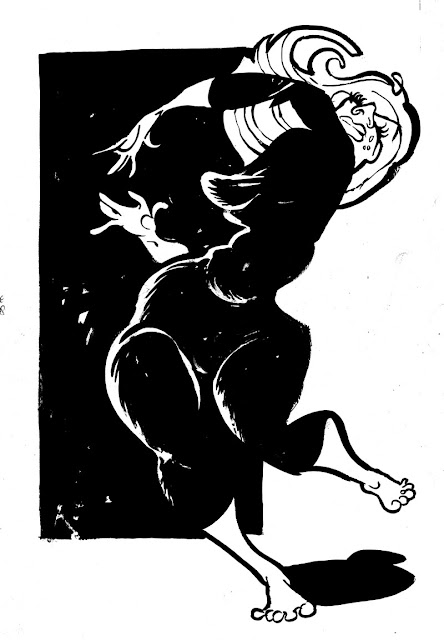 Today was a treat having to go back to report my dispute with a crooked car mechanic with his boss. I said only as much as I had to, and pretty much fell half asleep while the mechanic gesticulated wildly as he blubbered his lies and rationalizations to his boss. At one point, the money meant little, the next it was like handling gold. At one point, the mechanic pointed to me, touching my shoulder. I said, "*Don't touch me, please.*" I won & got my cash back in cash. As I was walking out, the mechanic was gesticulating to his boss again. Now I have to find a new mechanic.

From my novel:
“Come on, Red, it’s not as if you’ve never seen it before.”
"Get outta here with your crappy sexuality!!" she told him. But in truth, Red was attracted. Though Wheezy was a crummy human being, just laying her eyes upon his lovely dick again made Red want it so badly, she could taste it. She had to restrain herself. She didn't want him to catch her smacking her lips!
Wheezy got up from the couch and ambled towards Sugar Red, his cock, frank and veiny, out and bobbing in front of him. “Oh, come on, Red. For the moment, I’m bereft of feminine company. Then I thought of you and this came up.” Wheezy grinned smugly and shrugged. “I figured we could/might pick up where we left off.”
Though groggy with lust, Sugar Red was insulted. “So you think you can just come back, and get it? Pig.”
“Cunt.”
“Out.” Red jerked her thumb at the door.
Wheezy looked as self satisfied as ever. “Come on, baby. I’ll make it worth your while…” 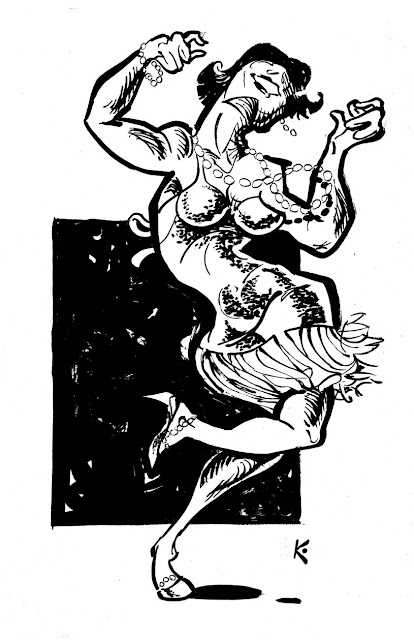 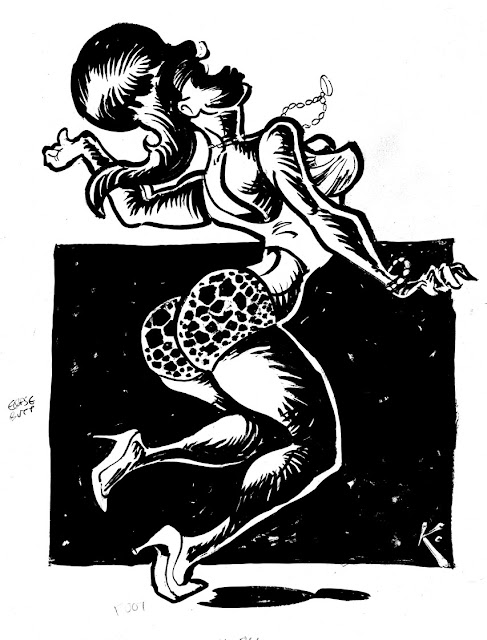 
What I think of the South. 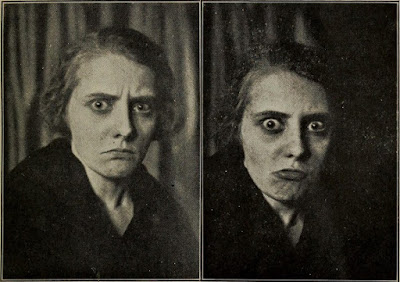 BLACK AND WHITE (1932) by Ivan Ivanov-Vano and Leonid Amalrik.

Aside from being pro Lenin, I see a certain amount of truth here.