When I was working on my first animation job, my bank was within a few blocks walking distance!! After a lifetime of scrounging freelance print work, I was making a good weekly sum, was excited, and thought I had finally *found my life*. I knew things would slow down every now & then, but there was no way I could have predicted this complete crash. First, everyone was trying to learn a computer program to keep working, and it seemed that within weeks, the program was outdated. (A lot of the small studios were wiped out that way; wasting huge sums on obsolete technology.) Then Flash was supposed to bring the work back to America, but it only made it easier to ship overseas. Now, unless you want to "create" a show (I don't), things are very tough. After The Simpsons, everyone was saying "Go to Fox and get a series", as if cthey were ripping contracts off like sheets of toilet paper.

When I moved to L.A., friends were predicting I'd have a chauffeur who resembled Ginger within months. A man, meeting me, was disappointed, and said he imagined me as so cool & stylish that I'd have Borzois leashed in each hand. Always letting folks down.


As subtle as Bluto.


A few days after beginning work for Bakshi, someone from the union announced over the studio's loudspeaker that I and several others to come downstairs and pay 2 grand to join the union. That job turned out to be the last union job I ever got.


As usual after a plane trip, I got sick after I moved to L.A. That was after I had started working for Bakshi. I took one day off, and his secretary was calling me every other hour to tell me I was disappointing Ralph and ask me when I was returning to work. I didn't want to lose the job, so I 'turned off'' the illness, went back, and was dismissed after 6 months. I kept thinking I was ok, but it turned out I had a worsening pneumonia.

Things happened fast when I moved to L.A. I got my first job in two days, and I didn't even want one yet. Unfortunately, it was on COOL WORLD. That was the smooch of death, at least for a bit.
Attitudes back home were different. I went to a NY party, and everyone was congratulating me. I reminded them of what a bomb it was, and they said, "But *you* worked on it!!" Such a difference from the "you're hot or you're not" deal here.


Found this Rasinski page being auctioned as mine on the web! Hail Connie Rasinski; I am, of course, very flattered by the error. 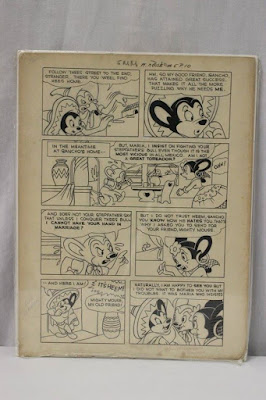 
Books do have some use. I was able to scan an image NOT on the internet to send someone. I suppose they're still good for some things.


There was a scene in POLLOCK in which his wife is screaming at him: "WHY DON'T YOU PAINT??? PAAAAAIIIIIINT!!" It doesn't work that way. 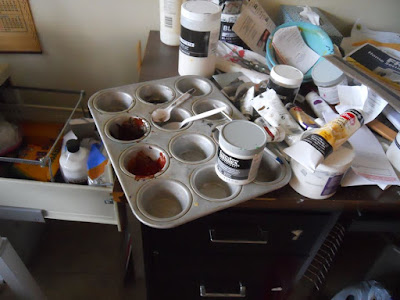 Posted by Milton Knight at 3:43 PM No comments: 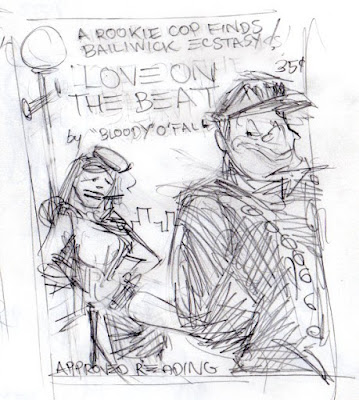 "Oh, quiet. There's more to life than your shorthand version."

To be "happy" pleases others.
To be content is to please oneself.
-Milton Knight.

Posted by Milton Knight at 4:39 PM No comments:

I didn't realize that an otherwise outstanding L.A. therapist was dropping potus-speak into our discussions: the government having to be broken before it can be fixed; "The country should be run like a corporation", and in an attempt at empathy, "To be born white is an honor and a privilege". Yet when I told her that the culture of dominance was of the devil, she had tears streaming down her face. She wouldn't speak to me after I left L.A. soil (in spite of having insisted our relationship was "a personal one", as they all did). I wonder how she sees things now. I'd like to leave a recording (which is all I'd get to do) asking, "Are you happy now?"


When potus smirks, he looks like an 'angry face' turned upside down.


I see Kroger advertising is using the new style in cartooning; rendering people with no outstanding characteristics whatsoever. Kind of like Weebles. So as not to offend anyone and everyone can "relate to it".
The Castration of Cartooning.

One definite improvement that comes with internet communications is that people don't step on each others' toes by interrupting. You either read their words or don't. I think people appreciate more my own input since they can't speak over it.

A lot of these inbred monsters will be trying to sue potus for medical expenses after they attend the rally.
Posted by Milton Knight at 8:52 PM No comments: 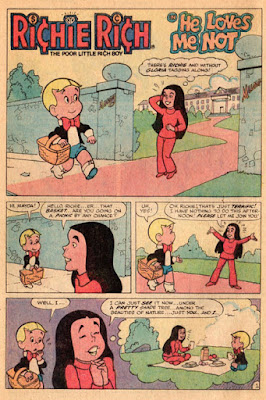 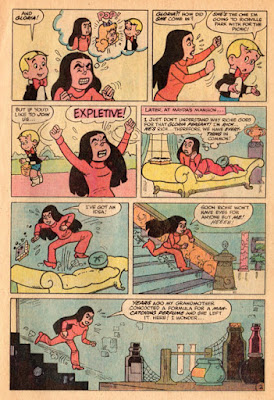 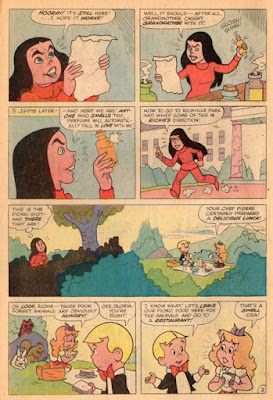 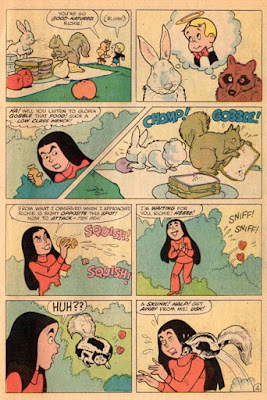 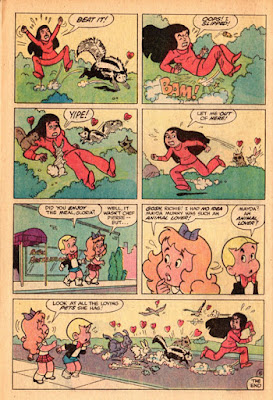 I started off in independent comics on the wrong paw by telling Art Speigelman I was doing Richie scripts at the time. I did not know that was The Ultimate Sin. (As opposed to say, working on THE SIMPSONS thirty years later.) 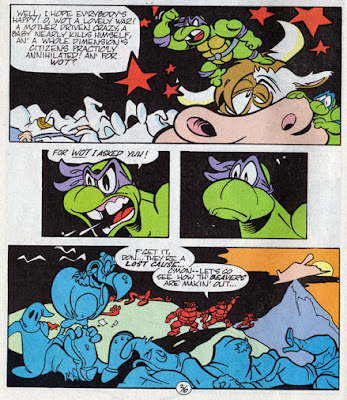 Posted by Milton Knight at 7:46 PM No comments:

A commission I got some years ago was filling 3x3" squares to fit in a two-sided frame. 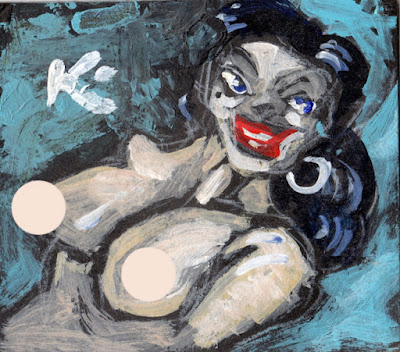 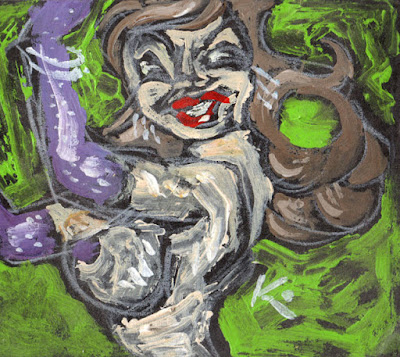 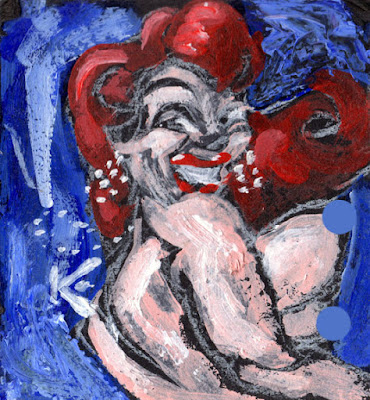 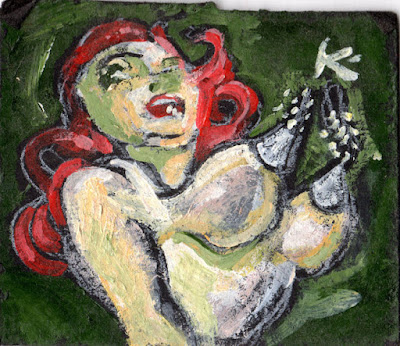 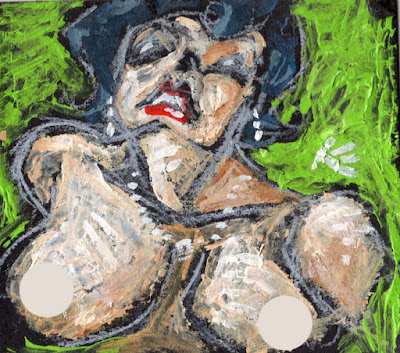 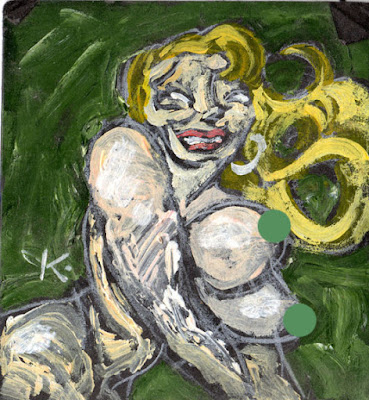 COPYRIGHT 2020 BY MILTON KNIGHT
Posted by Milton Knight at 5:41 PM No comments:

God is watching us and eating popcorn.

***
This rally reminds me of Jim Jones but not as fatal. I can dream, can't I?

Posted by Milton Knight at 3:25 PM No comments:

Any decent president would get on the podium and insist the violence be stopped all around.
Posted by Milton Knight at 5:45 PM No comments:

"He's no fun. He probably reads MAUS for laughs."

I've been largely ignoring the news, so I didn't know there's a demonstration against police brutality going on right this moment in Bloomington, Indiana. I see one person on Twitter is warning the good citizens to "arm up".

The tragic thing is I don't know if people can make up their minds without all this. They're that thick. People don't react until the matters hit home. I sensed that it would take something like Depression and Vietnam level demonstrations to nudge them into awareness. But peaceful is enough. That is, as long as the "good people" let them stay that way.
Posted by Milton Knight at 1:08 PM No comments:

Throughout history, people have used petulance and false innocence to get away with atrocities, because they don't generally hang pre-schoolers.
Posted by Milton Knight at 10:30 AM No comments: 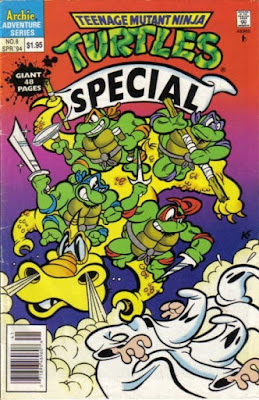 Hey, maybe potus will hire OJ to "speak up" for him.


Lots of people want to exercise their right to hate without being hated back. "Wha?? NO I'm not!!"

"Well, I don't know, Popeye; you're not holistic enough." 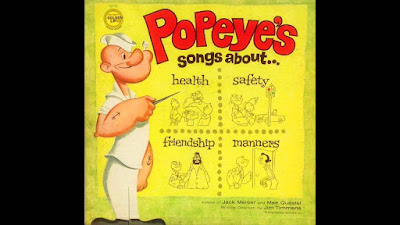 https://youtu.be/SaDi_FH23AQ
Posted by Milton Knight at 10:49 PM No comments: 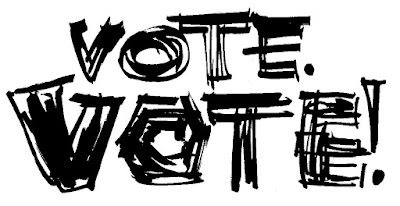 (proudly) "Why, millions have died because of me!!!"

If you can't trust Hollywood, whom can you trust?