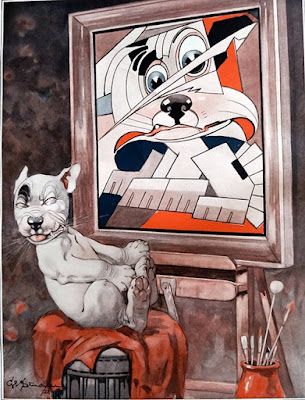 G.E. Studdy, soon before the premiere of a BONZO animated film in the 1920s. I admire his attitude. And he was doing breathtaking work all the while: "Oh, Bonzo's alright, bless his baby heart...All these years, BONZO has just been BONZO---a silly, portly puppy, behaving or misbehaving himself in some perfectly idiotic manner just for the moment, but leaving it at that, if you know what I mean...Also for the same sake don't ask me about what first made me think of BONZO, or what breed of dog he is supposed to be, or whether he just came into or out of my head, because I'm going to hit the man who puts those questions to me again."

It's somewhat gratifying to see cartoonists who (unlike me) were recognized as geniuses in the 80s still drawing the same old heads.

I had to drop a Facebook friend that was going on-and-on with fairytale, know-nothing advice about how to reach the Warhol-level success I deserve. Always on a disingenuous condescending level that denies the artistic "success" I have and do have (which is decidedly not on the level "I deserve", but now better than my last 20 years in L.A., although it isn't supposed to work that way). "All you have to do is..." "Just get an agent, and..." These no-experience friends glibly speak of artistic stardom with the savvy of a two reel comedy short; being "discovered" by a matron with a lorgnette. I've found there's no use trying to explain. He was on a roll; like a hyperactive kid, he wasn't stopping to think or hear. I can't even begin to get into contests of the sort. The contesting saps energy.. They must have "their dreams".

Agents are not there to alert the public to undiscovered geniuses. They're there to collect their cuts after the artist becomes a worthwhile investment. I've had five.

I came to a realization (even though it's always been in the back of my mind) about why I don't keep up with the latest TV cartoons, in a conversation I just had:
"Truth is, I've worked in studios only 6 months and it took me another 6 months to shake the shortcutting habits. I don't NEED their creative diseases. It just occurred to me: That's the main reason I don't "keep up". God, no. It softens the brain instead of strengthening it. Now I understand better my own disdain. 30 years ago, I hid my Golden Age comics on myself for the same reason; to 'unlearn' everything after I'd 'gotten it'. [Since I'm not obligated to a company], I don't want to end up making cartoons of cartoons, or comics of comics, which have been the norm for a long time."
Posted by Milton Knight at 8:22 PM No comments: 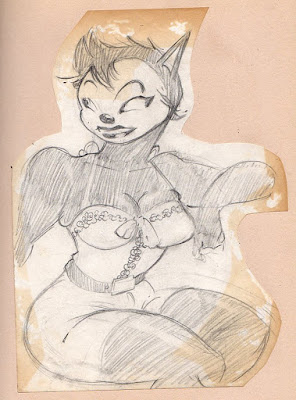 MOSTLY CAT WOMEN: Here’s Hoping You are Well & Happy.
April 2020’s Patreon Bonus is in the mailboxes of $2 & up Subscribers now! Six pages of printable, 600 dpi images selected from scrapbooks of the 1980s; the SLUG & GINGER and MIDNITE THE REBEL SKUNK period! Remember to download your Bonus this week!
Thanks so Much for Your Patreonage!
MK
https://www.patreon.com/miltonknight

Commissions going off in Monday's mail. 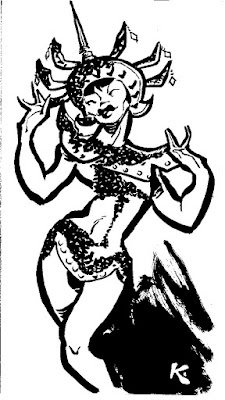 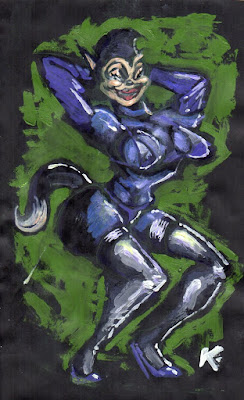 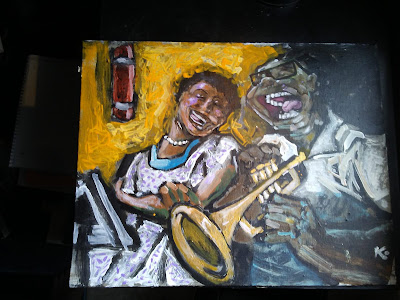 Posted by Milton Knight at 3:06 PM No comments: