After 333 posts, I am saying goodbye, at least for a while. Those who wish to keep updated can "friend" me at Facebook.

Thanks to you who've stuck around these years. It's been a lot of fun for me. 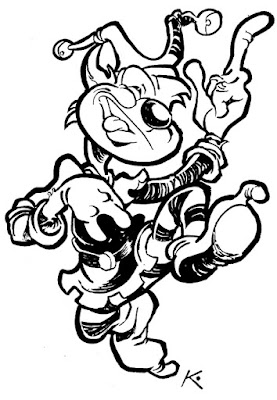 COPYRIGHT 2015 BY MILTON KNIGHT
Posted by Milton Knight at 8:28 AM 1 comment:

An astonishing amount of it is playing directly to a fan-fetish audience that doesn't know how small it is. This is what killed comic books!
Posted by Milton Knight at 12:43 PM 2 comments:

"Hater" is an inarticulate word. And as an intelligent black man, I know a lot about being regarded as "articulate".
Posted by Milton Knight at 1:41 AM No comments:

I'll tell you the truth; I've felt since I was a child that my art is half graphic, half narrative. I worked with both independently. Now I am more interested in using the words. I'm getting disenchanted with the process & outcome of the drawing.

From my current novel. Note: Paul is a 48 year old entertainer.

Paul walked into his bedroom. It was his nerves that got him, his goddamn nerves. He sat on the bed. He pulled a bottle of rye from the night stand. Paul was past the point of enjoying liquor. But just the assurance that there was a nip or two at hand gave him something of that warm, quieting sense of stability. Every thought became a profundity. He could get through life. Bittersweet surrender was at hand.

An hour later, Mama found her son stretched across the bed, with one foot on the floor, his mouth hanging wide open, not snoring at all, but drooling noticeably. She took off his shoes, put his leg on the bed and covered him with a blanket. But she drew the line at removing his pants. That he could do himself.

COPYRIGHT 2015 BY MILTON KNIGHT
Posted by Milton Knight at 1:28 PM No comments:

Girls were easy to get. Wheezy was an outlaw, dangerous, and dreadfully thrilling. There was the threat of a bruise with every kiss. He gravitated toward girls with low self esteem; ones begging for his approval. Each dreamed they were capable of being “the one” to fill the gap in his tormented soul. Wheezy developed a contempt for them.

Wheezy walked alone a lot of the time. His alienation was nurtured like a hothouse plant.

On the other end of the spectrum, Wheezy chose to join the high school’s drama group. He reveled in it. His frightening side dissolved. His fellow performers saw another side of him: alive with positive energy, amusing, and gifted with a devilish sense of humor. From the beginning, he was playing Falstaff and Puck, any character created with a deviant spirit.

His parents couldn’t have cared less; they didn’t bother to show up at the presentations. Instead of disapproving of his interests, they ignored them entirely.

The extremes of his personality confused and threatened teachers; he was an adolescent personable and excellent in his English, drama and art classes, but could otherwise be deemed a brute.

COPYRIGHT 2015 BY MILTON KNIGHT
Posted by Milton Knight at 1:20 AM 3 comments:

Some snippets from the fourth draft of my novel, THAT'S SHOW BIZ. Wheezy Gibson is an obnoxious, sadistic comedian.

Wheezy in Greenwich Village:
Wheezy cynically observed the ‘artist types’ (not necessarily artists, he thought) splashing black paint on huge sheets of paper, soaking themselves as well. It wasn’t calligraphy; what the hell was it? He was flabbergasted that such types were also just as attached to the Old Masters as he was.
Looking at a bookshelf, Wheezy said, “What? You like Tintoretto too?”
“Sure, man. He’s a master; any reason I shouldn’t like him?”
“No…but why do you do the kind of work you do?”
“It all adds up together, man. We live in an Art World.”
Wheezy felt ill equipped to argue.

Wheezy in prison:
Days in solitary passed. As was the prison’s intent, days nor even hours existed for Wheezy. Just time, the end of which he’d never be told. Wheezy tried not to allow any thoughts about “show biz” to enter his thoughts. He thought of patterns of wood grains in trees, textures of stones, shapes of clouds, anything that had no meaning to his old lifestyle at all. He recalled his favorite classical pieces and “played” them over in his head. He remembered the Renaissance paintings he had such respect for, and “examined” them in his mind, brushstroke by brushstroke. He wasn’t happier. But he wasn’t wasting time, either. There was nothing else to do.

After Wheezy "services" a masochistic "patroness":
Kitty got up on her hands and knees, crawled to Wheezy’s feet, and fervently threw her arms around his ankles, and kissed his shoes passionately and repeatedly. “Wheezy…I knew you’d do it for me. I deserved it…every bit of it.”
Wheezy asked, “WHY do you think you deserve it, lady?”
“Because I’m rich.”
Wheezy did a double take.
“Your kind", Kitty whimpered, "…you suffer so while people like my kind suck you dry. Don’t you get pleasure from getting even?”
“Well, actually, no, Lady. Why don’t you give your earthly possessions to the Army-Navy store or something? This makes no sense.”


COPYRIGHT 2015 BY MILTON KNIGHT
Posted by Milton Knight at 4:14 PM No comments:

An unpublished two page comic with one of my own favorite characters, an exemplary exponent of the Playboy lifestyle. 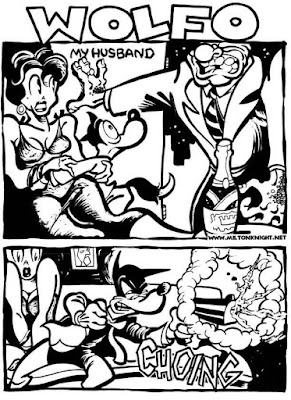 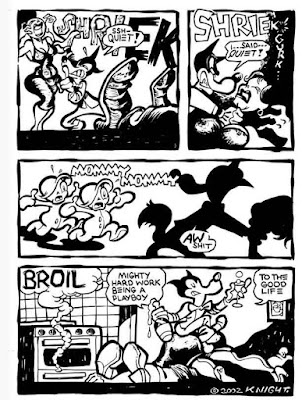 COPYRIGHT 2015 BY MILTON KNIGHT
Posted by Milton Knight at 2:04 AM 1 comment:

MY NOVEL: WHERE IT'S AT

Work on my novel at present: I did what I've heard advised; transcribed each story point of the second draft on separate index cards, stretched them out in rows on a table, examined the set, and placed them in different orders to see if I could strengthen the storytelling by changing the order of the events, seeing which would make the best contrasts. punchlines, etc. The fact that I started the process on a table at the coffee shop got me into a couple of interesting conversations.

I changed the order several times, and found the one I thought was best. It was somewhat different from the order of the second draft!

Next comes improving the text itself and filling in gaps, which I expect to take some time. So far, I've gained another 1500 words.I won't have to worry about saying "goodbye" to these characters for a while.

Getting it published? Well, as I said, I'm doing this for myself, so it's already paying off. What may happen later is of no concern now.


As with all artists, young people will come to me for drawing advice. Some hints are heeded more readily than others. I didn’t make up most of them. They were handed down to me. Here’s some hints that generally aren’t taken:

STOP WATCHING CARTOONS FOR SIX MONTHS. Most young cartoonists (and currently, many older ones) find it impossible for even a day. I’ve done it longer than that, just to get the accepted “way of doing things” out of my head and to find my own ways.

DON’T DRAW CHARACTERS DOING NOTHING. So commonly, artists will stick to drawing “presentation” poses: characters with one hand up, signaling “hello” in that 1930s way; standing straight with hands on hips; or doing standard eye-pop stances. These are so common because they’re the easiest to draw. Better to draw a character with brains. Draw them actually doing specific things that challenge your own skill. (My favorite is dancing.) A sketchbook should be filled with stuff you haven’t tried yet, not just “funny” heads & “cartoony” poses. And, for heaven’s sake, draw groups of them, two or more, reacting to each other in conversation, as well as objects and backgrounds. Then apply the stuff you have down pat in your finished art.
Now that “exaggerated” cartooning has become so common (it was held in low regard until the 1990s), I suppose my own reaction has been to try to “fake it” less. I want my drawings to be sophisticated as well as fun.
I was present when someone said to Ralph Bakshi that my work was “just like Jim Tyer”. Ralph said, “Naw, Milt’s work has more intellect than Tyer’s.” Whether one would see that as good or bad (even Ralph), it was a proud moment for me.

FORGET CIRCLES FOR A CHANGE; SQUARE THE CONSTRUCTION DRAWING OFF. Can add solidity and even speed. You can become more aware of what your drawings are because the characters are solid objects, not superficial line approximations. Give your characters collar bones and hips. Here’s a heresy for you: put your Preston Blair book away now and then and look at people and animals with your own eyes.

Returning to drawing after a sabbatical, I’m using photos of dancers whose poses are a little new for me to try. In no way am I hinting that these drawings are perfect, or that I’d even allow them to be seen elsewhere. Even as I scan them, I’m seeing errors. They’re the kind of sketches I’ll wait another day to review and repair. Gotta risk being strange before you can be good. 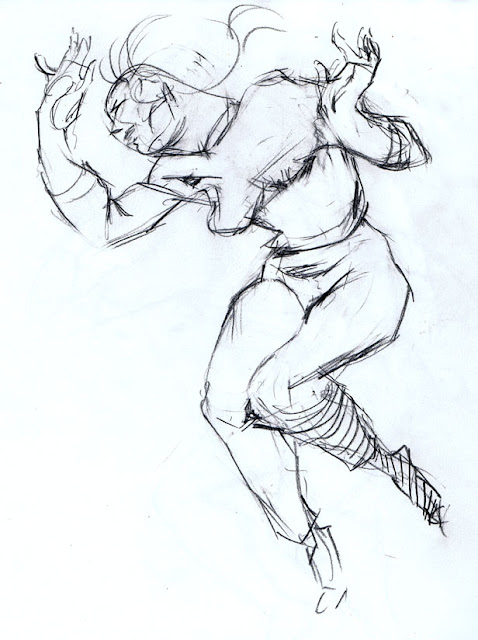 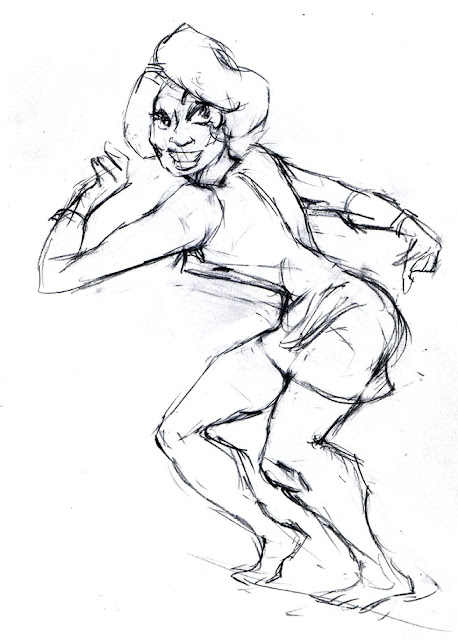 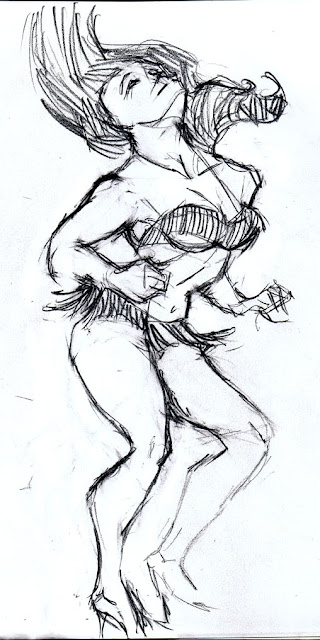 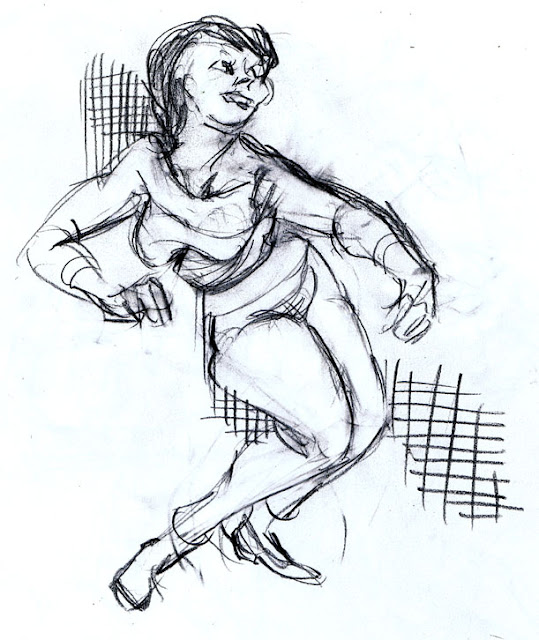 LET'S TAKE THAT WORD BACK!! 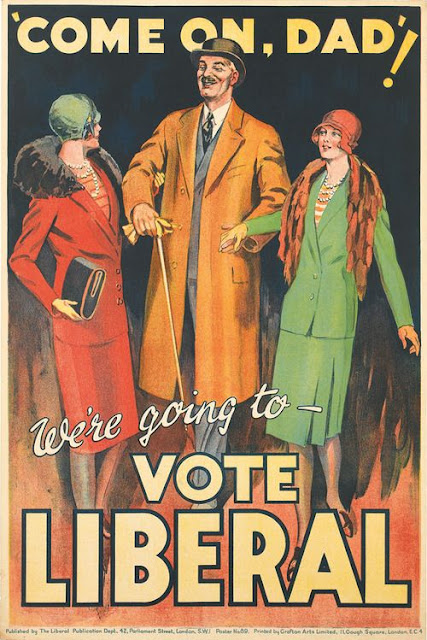 Posted by Milton Knight at 2:35 PM No comments:

TOO CRAZY FOR COOL WORLD

While working on COOL WORLD, I told Ralph B. that Holly, the dancer, shouldn't just do rotoscoped moves. Being a 'doodle', she should do things a 'doodle' can. Dribble her head like a basketball, or grow more legs and do a can can. If it was synced to music effectively, rather than seeming random, it could have worked well. But, no, that wasn't 'sexy'. So she ended up being, IMO, a 'live' character with lines.

Even I don't love the film. But putting it down, meh. A waste of time. Now, DESPICABLE ME 8...

Sexier than Holly: I ran Ralph the dancing girl shot from THE TUBA TOOTERS. His mouth hung open, and he said "Oh my GAWD!!" But such designs were relegated to the BG. 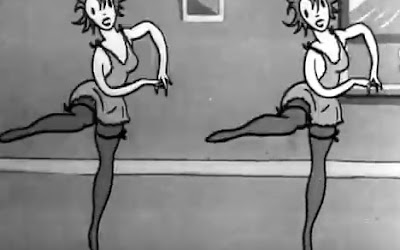 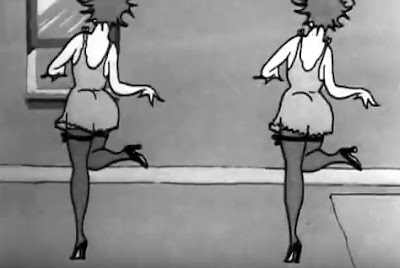 f you're going to draw a cartoon, DRAW one, I say. With a kapital "K"!! (From NATIONAL DEFENSE, an Egyptian cartoon from 1940.) 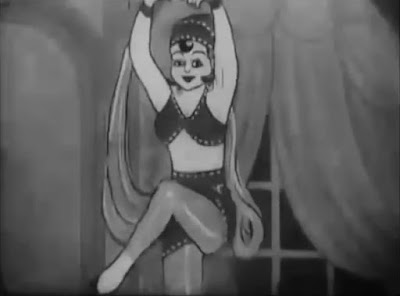 Now, THAT gets my pecker up!!